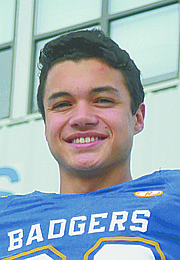 Setter, the Daily Courier’s 2015 Co-Offensive High School Football Player of the Year, rushed for 1,237 yards on 159 carries and 21 touchdowns his junior season with the Badgers.

Late this past spring, the 5-foot-11, 180-pound senior Setter reportedly enrolled at Bradshaw Mountain High, which is about 10 miles west of Dewey. Bradshaw Mountain football coach David Moran said Setter transferred away from Prescott in late May.

Setter has practiced sparingly with Bradshaw this summer, awaiting word from the AIA about his fate.

On Tuesday night, Setter was spotted at the Bears’ preseason scrimmage versus Goodyear Millennium at Bob Pavlich Field, although he did not play.

Wearing a black T-shirt and shorts with a helmet partially on his head, Setter shadowed coach Moran behind the line of scrimmage and mingled with players and coaches on the sideline.

Setter would not be allowed to play until Week 6, in time for the Bears’ Sept. 30 clash versus 4A Grand Canyon Region rival Cottonwood Mingus Union at Bob Pavlich Field in Prescott Valley.