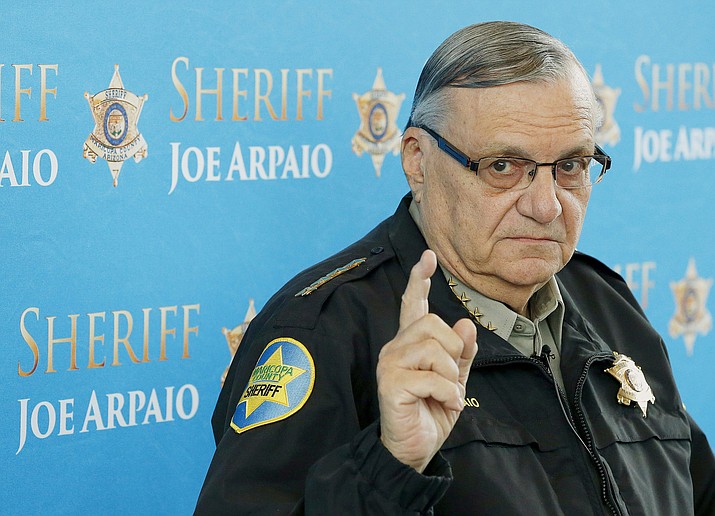 Maricopa County Sheriff Joe Arpaio speaks at a 2013 news conference at the Sheriff’s headquarters in Phoenix. Arpaio has raised close to $10 million in his bid for a seventh term, a stunning collection of campaign riches for a local police race.

Dissecting those words, the first – “America” – couldn’t be more true.

Running for his seventh term in Maricopa County, the 84-year-old sheriff has apparently amassed a campaign war chest of nearly $10 million – exceeding what is normally spent by both the winning and losing candidates in a typical congressional race, according to the Associated Press.

The clincher is only about 17 percent of all contributions that exceeded $50 came from Arizona residents. Others include: California, 16.6 percent; Texas, 8.5; Florida, 5.5; and Washington, 3.1.

It reminds me of comments I have seen and heard whenever Arpaio comes to the Prescott area for a speaking engagement. Frankly, he receives support and kudos. He’s so popular some people look upon him as “their” sheriff.

Is it the tent city to house inmates that makes him popular? How about the pink underwear or the baloney sandwiches? Those “no-nonsense efforts” help, but from other articles – in publications such as USA Today and elsewhere – mostly it’s his tough stance on immigrants who are here illegally.

Glenda Olson, who runs a gunsmith business with her husband in Plains, Montana, told the AP the couple has made small contributions to Arpaio over the years because of his focus on illegal immigration. She said Arpaio would not “continue to fight at his age unless it was very important.”

Gary Budway, a retired corrections supervisor from Venice, Florida, said Arpaio’s law-and-order message inspired him to contribute about $200. “He is the guy doing the job,” Budway said, adding that he admires a man of Arpaio’s age who is “still going, fighting for the cause.”

Ironically, though, Arpaio also is one of the most embattled sheriffs ever. He was forced to abandon much of his anti-immigration effort in January 2015 after a lawsuit over his business raids that targeted immigrant workers.

Lawsuits, like that one, come because he is targeted by entities such as the ACLU and the Obama Administration, according to media sources.

But if you don’t trust the media’s take on it all, just lend an ear. His supporters believe it.

“The people who were complaining about him were complaining because he was doing the right thing. He is just an honest cop. He isn’t politically correct,” said Thomas Smith, who operates a marine repair business in Signal Hill, California.

I recall once, in 2015, our sheriff – Yavapai County Sheriff Scott Mascher – commented on Arpaio’s popularity for the Courier: “He’s done a tremendous job for the United States. He’s done things the federal government failed to do in upholding laws and statutes.”

Finally, I have to mention that Arpaio, as of September 2015, also has reportedly cost Maricopa County taxpayers $142 million in legal expenses, lawsuit settlements, and court awards.

How does it all continue to work for Arpaio? I say it is a bit of the popularity, despite legal setbacks, and believing in what he does regardless of critics.

Well, he better believe it – because his political strength has been slipping, largely based on the lawsuits; the latest has him facing a possible charge in a contempt-of-court case. Why? A judge is considering whether to recommend criminal charges against Arpaio for ignoring court orders in a racial-profiling lawsuit.

Whoever brings Arpaio down will be a David against Goliath. Here’s wondering if David will be an opponent … or a judge. Which would you rather it be – a challenger, judge or retirement?