Days Past: The first train to Prescott 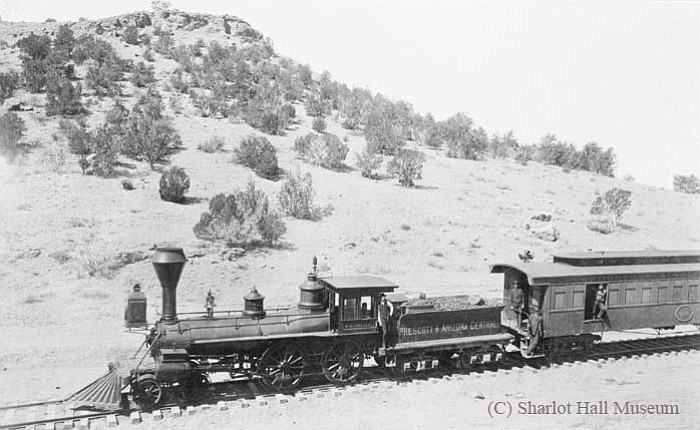 In 1882 the Atlantic and Pacific Railroad finally met a long-sought goal when it built track across northern Arizona. But to the dismay of Prescott residents it went through Ash Fork, somewhat to the north of the territorial capital. There were a lot of mines around Prescott at the time, and they as well as the town stood to benefit from rail transportation. Local businessmen and investors advanced several proposals for construction of a rail line to link Prescott and Ash Fork. Around 1884 the competition was winnowed down to two differing proposals. The A&P urged the leaders of the two factions to compromise for everyone’s good and to get on with it. 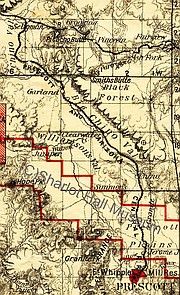 A 1887 map of Prescott and Arizona Central Railway, from Dinsmore’s Map of Arizona Territory.

The competing interests came together, but even after consolidation, there was in-fighting for control of the unified line. Eventually Thomas S. Bullock emerged as the leader. He was able to persuade Yavapai County to back construction with bonds amounting to $4000 per mile, if the road were completed by the first of January 1887. In May of 1886 Bullock started grading and laying track south from Prescott Junction (what is now called Seligman). Thus began the Prescott and Arizona Central Railroad (P&AC).

The road was completed by torchlight on New Years Eve of 1886, so the county bonds were issued, as were railroad stock and bonds. One of the concessions Bullock had to make was that any extension to the south of Prescott would go along the Hassayampa River to the west, where the opposing faction owned mines, even though the eastern Black Canyon route would have been easier for construction, and would have served mines in which Bullock had an interest.

There were no towns along the P&AC route except for Prescott at the terminus. Several ranches served as stops on the way, including Sullivan’s (now OO Ranch) south of Seligman, Garland’s in Big Chino Wash, and Banghart’s just south of the Verde River in Chino Valley. The town of Verde, also known as Witherellville, was established at what is now the golf course just south of the Prescott airport, where the wagon road from Jerome met the railroad.

For various reasons, the happy days didn’t last long, as the roadbed was poorly constructed and prone to washouts, which delayed trains, mail, and freight. Rather than working with locals, Bullock blundered badly by raising freight and passenger rates. He also delayed building south of Prescott in hopes of being able to use the Black Canyon route. Early in 1892, the excluded faction decided to build its own railroad, and wisely sought and obtained support from the A&P and its parent company, the Atchison, Topeka and Santa Fe (AT&SF). The new road started in Ash Fork, but approached the P&AC near Paulden. Bullock’s existing railroad had its best days carrying materials for construction of its rival.

By fall of 1893, the P&AC was in receivership, due to an economic depression and the competition – Prescott just wasn’t large enough to support two railroads. When arsonists burned the bridge at Willow Creek, the railroad was pushed to bankruptcy. The next two years found the railroad idle, and in spring of 1896, the rival railroad bought 25 miles of P&AC track. The rest was taken up by Bullock and moved to northern California, along with Engine No. 3, for use on the Sierra Railway, which ran from Oakdale to the gold mines in the Sierra Nevada foothills.

The little railroad was gone and forgotten - the grade that wasn’t washed away by Big Chino and Chino creeks was taken over by weeds. Over the last few years, about 20 miles of the original 73-mile grade has been rediscovered, with the use of modern technology such as GPS and aerial photography. However, the county bonds were not forgotten so easily, and this became a big bone of contention when Arizona desired to become a state. The solution was finally worked out by 1912, when the Arizona Land Trust was set up.

On Saturday, August 13 at 2 pm, Andy Odell will be at the Sharlot Hall Museum for an in-depth discussion of the Prescott and Arizona Central Railroad in the West Gallery of the Lawler Exhibit Center. Admission is free.

“Days Past” is a collaborative project of the Sharlot Hall Museum and the Prescott Corral of Westerners International (www.prescottcorral.org). This and other Days Past articles are also available at www.sharlot.org/library-archives/days-past. The public is encouraged to submit ideas for articles to dayspastprescott@gmail.com.Please contact SHM Library & Archives reference desk at 928-445-3122 Ext. 14, or via email at dayspastprescott@gmail.com for information.