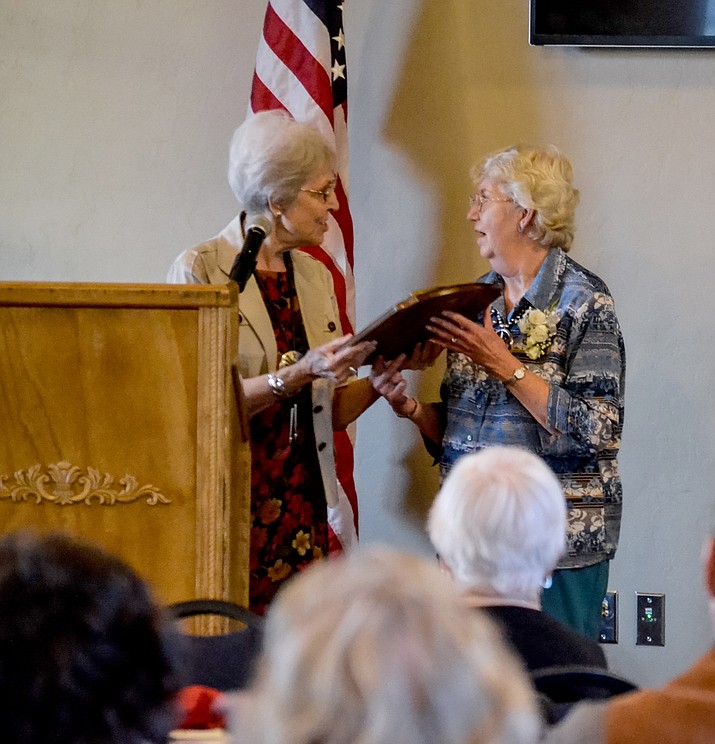 Reba Grandrud, left, presents the Sharlot Hall Award to Sylvia Neely during the 2015 Western History Symposium. This year’s symposium will feature presentation of the annual award to Winifred “Winn” Bundy, owner of the Singing Wind Bookshop in Benson, for her wide-ranging work as a historian and literary preservationist.

Arizona’s past – in all its western glory – will be on display this weekend at the 13th annual Western History Symposium.

The all-day event is set to kick off at 9:30 a.m., Saturday, Aug. 6, with a look into the life and legacy of Montana copper baron William Andrew Clark (whose namesake is the Town of Clarkdale), and continue through the 7:15 p.m. keynote talk on the entertainment offered at Arizona’s honky tonks, brothels, and mining camps.

In between, attendees at the free event will be treated to insights into topics such as: West-central Arizona’s native people; an international hostess and resort owner of Cherokee and black heritage whose Oracle resort was known as the “epitome of western opulence”; the history of baseball in the Arizona Territory; and Arizona’s history with the Medal of Honor.

The symposium dates back to 2004, when Fred Veil – then the sheriff for the Prescott Corral of Westerners and currently the executive director of Sharlot Hall Museum – approached former museum director Richard Sims to propose a day focusing on Arizona’s western history.

“He liked the idea,” Veil said of Sims, and from there, the first symposium was born.

In the early years, the presentations took place on the Sharlot Hall grounds, but Veil said the event soon grew to the point that that was no longer practical.

After trying various venues, including the Hassayampa Inn, the symposium moved last year to the city’s Prescott Centennial Center. This year’s symposium will also take place at the Centennial Center, 1989 Clubhouse Drive, located near the Prescott Airport and Antelope Hills Golf Course.

Veil noted that organizers typically set up for about 150 attendees, and he estimates that as many as 300 people come and go throughout the day.

Along with the various presentations, the day also will include presentation of the 2015 Sharlot Hall Award to Winifred “Winn” Bundy of Benson, owner of the Singing Wind Bookshop in Benson, for her wide-ranging work as a historian and literary preservationist.

Admission is free, open to the public, and reservations are not necessary, according to information from Sharlot Hall. (The evening dinner requires reservations, for which the deadline has passed).

Sharlot Hall Museum and The Prescott Corral of Westerners are co-sponsors of the symposium, and Arizona Humanities is co-sponsor of some of the presenters.

• 1 p.m. – “Annie Neal: Black Cherokee Princess, International Hostess, and One Tough Lady” by Barbara Marriott, author of more than a dozen books, with an interest in the historic southwest from about 1850 to 1910.

• 2 p.m. – “Play Ball! The History of Baseball in Arizona Territory” by John Tenney, an insurance professional in Mesa and author of a book on Arizona territorial baseball, who has presented several lectures on early baseball in Tombstone, Tempe, and Phoenix.

• 3 p.m. – “Arizona and the Medal of Honor – from the Indian Wars to Vietnam” by Fred Veil, executive director of Sharlot Hall Museum and past sheriff of the Prescott Corral of Westerners.

• 7:15 p.m. – “Honky Tonks, Brothels, and Mining Camps: Entertainment in Old Arizona” by Jay Cravath, a composer, musician, writer, and scholar in the field of music and indigenous studies, who currently serves as the cultural director for the Chemehuevi Indian Tribe.