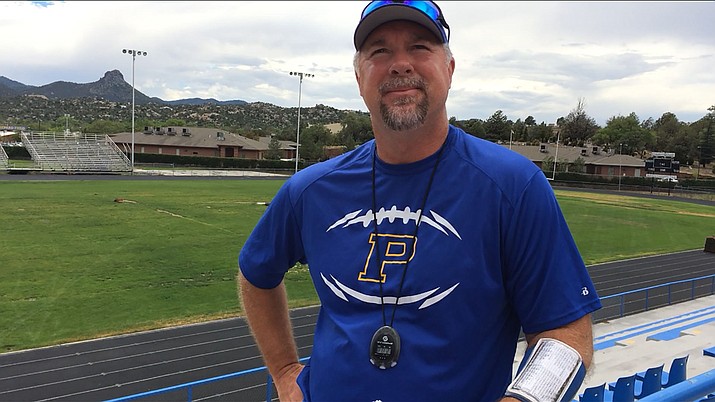 The problem was, Michael Gilpin had already started…over five months ago.

After a hiring committee tapped him the 30th head coach in the program’s storied 106-year history in late February, Gilpin immediately went to work.

And like red ‘Xs’ on a calendar counting down the days to football season, the time has come for Gilpin to lead the Badger football program into the next era.

Like the next fan in line for tickets at Bill Shepard Field, that era, however, will have a similar feel to it, Gilpin hopes.

“I want to continue to grow this program that coaches like [Cody] Collette, and coach [Lou] Beneitone before him, have laid so much foundation for,” Gilpin said. “I want to … honor what they’ve done, while bringing my own spin to things. I want to keep this program being something that the community is proud of.”

In his first few months on the job, Prescott athletic director Missy Townsend noticed plenty to be “proud” of. One word she used to describe Gilpin’s performance so far is “passion.”

“He’s passionate about football. He’s dedicated, he’s been here every day this summer,” Townsend said, adding that the various weight room sessions, week-long camps and seven-on-seven weekends are not being overlooked.

And it’s not just about football for Gilpin, Townsend said.

“I see a real sense of connectivity to the boys he has,” Townsend said. “He cares more about them, more than just being a player, he cares about them as people too.”

That sentiment coincides with Gilpin’s main philosophy, which is to “develop the whole person.”

“We emphasize character from the second [players] walk onto this campus,” Gilpin said, adding that plenty of his players come from good families, but that doesn’t mean everyone does.

“That character component may be just review for a lot of our boys, but it might be the first time some kids hear it,” said Gilpin, who holds a master’s degree in education from Northern Arizona and teaches AP psychology for Prescott. “They hear coaches talking about it and stressing it, then see so many players living it. It can’t help but have a positive impact on the boys here.”

The Whittier, California, native added the players have adjusted well to his style of coaching, and he expects no less.

“They are hard workers, they are community leaders and they make you feel good for the future of our country,” Gilpin said. “We’re competitive. We like to win football games. We don’t always win, but we always show up and play. It’s a great place to coach if that’s what you care about.”

In the last two seasons under Gilpin’s offensive tutelage, the Badgers have averaged nearly 350 yards and just a tick under 38 points per game while going 14-6 overall.

Despite the gaudy numbers, Prescott hasn’t qualified for the state playoffs since 2012 when they lost 52-14 to Ironwood Ridge.

Gilpin hopes to change that quickly, and he hopes the town of Prescott will back him 100 percent.

“Being a coach, being involved in the football program at all at Prescott High School, it’s a special thing,” Gilpin said. “If you’ve ever been here on a Friday night, you know exactly what I’m talking about. It’s a part of America that seems to not be everywhere that it once was. … It’s an amazing feeling to be a part of this program.”