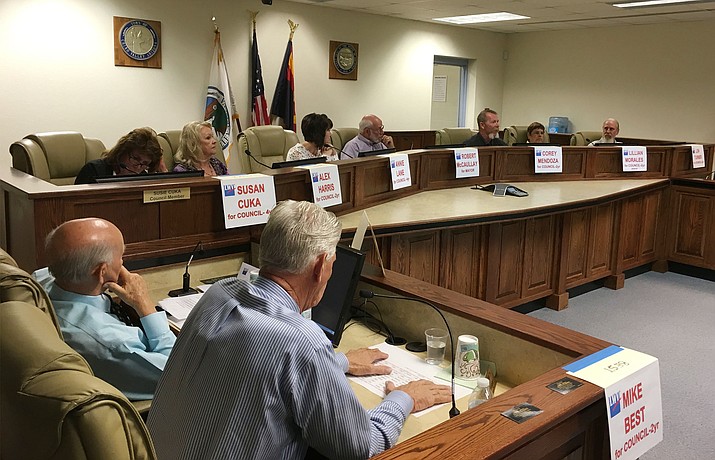 Candidates for the Chino Valley Town Council answered questions from voters at a forum held Wednesday, July 27 at Town Hall. Nine of the ten candidates appeared. Most questions centered on the town’s lack of infrastructure and the possibility of obtaining the money needed to add it without raising taxes.

Nine of the ten candidates for the Chino Valley Town Council attended a candidates’ forum on Wednesday, July 27, making statements and answering questions from residents.

Most of the questions from a packed room at Town Hall dealt with Chino Valley’s lack of infrastructure and how potential councilmembers would improve that, and how would they pay for it.

The forum was sponsored by the Chino Valley Area Chamber of Commerce and the Yavapai County League of Women Voters.

“There is no property tax here, but there are those who would burden us with one,” McCaullay said, pointing to the 2014 bond election that failed. “Our current mayor and vice-mayor were strong advocates for this tax, I was, and am, and advocate of no taxes.”

Croft said that the town is currently doing an in-depth study of the roads in Chino Valley and that when it is finished, probably in December, that is when they’ll look at how much it will cost and begin figuring out how to pay for it. He said they may have to go to voters.

There are three candidates for the three open seats with four-year terms: Councilmembers Susan Cuka and Jack Miller and Planning and Zoning Commissioner Annie Lane. Miller did not attend the forum. He wrote in an email that he was on a family vacation that was planned before the forum date was announced.

“This is something I will concede with Darryl [Croft] that the voters are going to have to ask themselves if they want” Cuka said of paving more roads. “That conversation is going to have to happen, and it’s going to come from the people.”

“It is going to be up to the voters in town how we repair our roads, but I think it’s something that needs to be done,” Lane said. “… It is the bottom line, we need infrastructure to bring businesses into town.”

“There is one thing left to do, and that is our water system,” Best said. “If I’m elected I will continue to try and get them [City of Prescott] out of our water system.”

Harris pointed to the town having a surplus the past couple of years in its budget, suggesting that extra money could be used for infrastructure improvements. Current members of Town Council said that money is the town’s contingency fund, and would prefer not spending it in case of another economic downturn, such as in 2008. There is more than $500,000 in that fund based on the last budget projection.

“I do believe that we have to have a rainy day fund,” Mendoza said. “You saw what happened when the economy comes to a standstill.”

Morales said the town needs to do a better job looking at other communities that were able to add infrastructure as cheaply as possible, and what creative ways they came up with to pay for it.

“Short of a geo-bond type of thing, where we have a property tax, I’m not sure where we’re going to come up with the money,” Turner said.