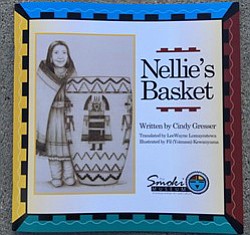 Proceeds from the sale of “Nellie’s Basket,” a children’s book by Smoki Museum Executive Director Cindy Gresser, will go to restore the story’s subject.

Executive Director of the Smoki Museum Cindy Gresser recently wrote a children’s book titled “Nellie’s Basket,” which was illustrated by Fil Kewanyama. There will be a book signing at 1 p.m. on Saturday, April 30 at the Smoki Museum, 147 N. Arizona Ave.

The book is the story of Nellie Quamalla and Gresser was introduced to her story in a book called “Hopi Summer” by Smoki Trustee Carolyn O’Bagy Davis. Quamalla lived in a Hopi Village in 1927 and decided she had to make a basket because she wanted to have a store in her village to make it easier for people to get what they needed, Gresser said.

“She worked and worked … to get this basket done and when she finally got the basket done, it was so large that she couldn’t get it out the door of her home,” Gresser said, noting that Quamalla’s family had to remove the door frame and stones to get it out so it could be sold.

The basket sold for $500, which gave Quamalla the money to buy the stock for her store and the people of the village didn’t have to make a 20-mile trek just to go to the store, Gresser said.

The basket was referred to as the Wishing Basket because people would put money in it and make wishes, Gresser said. Kids were also allowed to play in it. After 1927, the basket was abused so heavily that the rim broke and the bottom broke out, she said. Now it’s located in Santa Fe at the house of a friend of Gresser’s. She went to go see it and was excited to be able to do so. Gresser’s friend told her that if she loves it so much to do something about its state. So she wrote the book.

“It’s the perfect moral tale, if you will,” Gresser said. “A person who has nothing uses her talents to benefit the good of all the people in her village.”

Gresser convinced Davis and her husband to fund the publishing of the book and got Kewanyama to do the illustrations. He grew up hearing about Quamalla and her basket and is actually related to her, Gresser said.

Kewanyama echoed Gresser, stating that it’s a good story that’s about looking after one another which is how the Hopi way is even today, he said. Helping each other is a circle, one person helps another and it comes back on the first person, Kewanyama said.

Kewanyama illustrated the book by hand, studying the pictures he was given by Gresser.

“Making the basket as best as I could was a challenge,” he said. “But overall it really gave me a sense of purpose to do this.”

Copies of the book sell for $9.95, Gresser said. Proceeds go to the restoration of the basket and the goal is to see Quamalla’s basket back on public display.

Quamalla’s basket is an important piece of contemporary Hopi history, Gresser said, adding that there are members of her family that should be able to see the basket and know that she made it and that it was a part of history.

“Not just Hopi History, but history of the southwest,” she said. “I want to encourage young weavers to keep weaving baskets. I want them to see what can be accomplished by one single woman who had a purpose.”