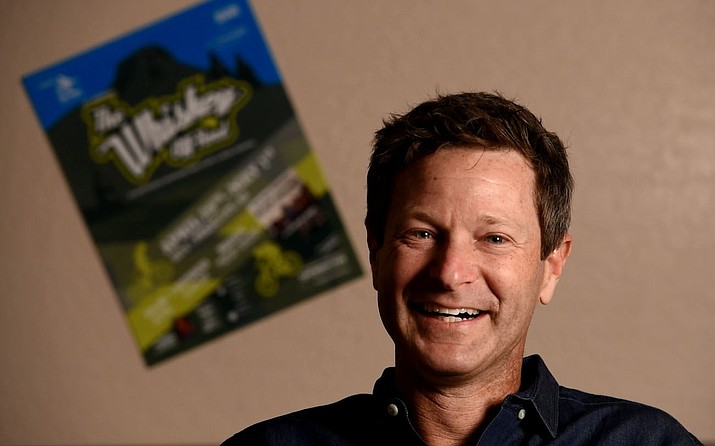 PRESCOTT — As the organizers of the Whiskey Off-Road endurance mountain biking races brace for their 13th annual running here on Friday, April 29, through Sunday, May 1, it’s worth noting how the event has grown since it began in 2004.

From humble beginnings, the Whiskey has blossomed from a short 1-1/2-day event with only amateur races to a three-day extravaganza complete with a pro criterium, amateur and pro races, bike-vendor tents, live music and a beer garden.

The Daily Courier sat down with Whiskey Off-Road co-founder and Tucson-based Epic Rides president Todd Sadow to discuss how the Whiskey has remained relevant to an ever-evolving mountain biking community as the event approaches nearly a decade and a half in Prescott and on the Prescott National Forest.

What follows is a small portion of a nearly one-hour-long interview with Sadow, who drove up from his headquarters in Tucson to meet with the Courier earlier this month

Courier: What makes the Whiskey Off-Road special to you?

Sadow: The Whiskey Off-Road is special to me because of the five events we [Epic Rides] have throughout the Southwest [24 Hours in the Old Pueblo, Whiskey, Grand Junction Off-Road, Carson City Off-Road, Tour of the White Mountains].

It’s the third one that I ever created, so there’s some of that ‘third time’s a charm’ sort of character qualities to it.

It’s also the event that kind of gave birth to the Epic Rides Off-Road Series concept, which is what we’re now spreading throughout the country with, and is very much pioneering the mountain bike industry – the industry’s sort of resurfacing, or resurrection, I suppose.

Courier: How has the Whiskey Off-Road impacted Prescott?

It’s a three-day event, whether people are riding on one day or not, with the live music and the bike expo. Being based in downtown Prescott gives a lot of out-of-town people a really nice interaction with the community here. It creates a nice emotional bond with everybody as well.

For the person that lives in Prescott, it’s a chance to show off their community and to give it a nice, healthy identity.

Courier: How has the race evolved over the past 13 years?

Sadow: The Whiskey Off-Road has really evolved significantly since the first year. In the first year we did have a formal relationship with the City of Prescott, and there’s always been an interest in what it can do economically and how it can interface with the community to truly leave behind an annual benefit and to sincerely represent the identity of the community.

But I don’t think anybody in the first year had any idea that in the 13th year it would offer two stages of music, three days of live music, two stages of pro racing with the biggest cash purses in the world [$100,000 overall purse tied into a three-race off-road series with Grand Junction, Colorado, and Carson City, Nevada] – let alone drawing in 8,000 to 9,000 people into the community for a mountain bike-centric weekend. I don’t think that was ever the goal or the objective, but it turned into that. We’ve made a lot of changes, as recent as last year – adding the second stage for music.

We updated the first third of the course with a lot of support from the Prescott National Forest Service. It’s completely fresh in showing off segments of the Prescott Circle Trail, which was recently completed, and just continuing to show off the community in a great, refreshing way.

Courier: What have been some of the stranger things that you have seen on the course during the Whiskey Off-Road through the years?

Sadow: The highest on the list is one of the riders being hit by a deer one year while they’re rolling out, going up Copper Basin Road. As you can imagine, that’s a pretty steep, pretty long climb, and so no one’s moving very fast, which makes it even more odd that a deer couldn’t avoid a really slow-moving mountain biker going up pavement. But [the deer] cracked the [bike’s] frame, knocked him over.

The deer bound off and everything was fine with the deer, fortunately, and the rider was OK.

A couple years ago, we made headlines with the epic weather that moved in during event weekend, and just really splashed down. We had everything from a nice drizzle to torrential rain to sleet to snow to driving hail – all of it in a matter of a few hours. That day lives in infamy for all the riders. It immediately turned into a legendary year because of that.

Going into event weekend, everyone wants good weather. And good weather comes in different forms. Blue skies, no wind? Perfect. Cool day? Great. Warm day? Better when you’re in the forest versus on your way back down to Skull Valley.

Everyone knows when they sign up that they’re going into a bit of a death march, because it’s not an easy ride. Anybody that can finish this – the 15 Proof [mile], the 30 Proof [mile], the 50 Proof [mile] – they’re a tough individual. They are an accomplished mountain biker, for sure.

But then you add on top of that any of the elements – whatever Mother Nature wants to throw at people – and it does add to the experience. Everything from the experience itself, when they’re riding, to the butterflies of event week and getting ready, or hoping that you are ready.

Whiskey Off Road 2016 Race Preview with Todd Sadow by dCouriervideos

Between Two Turns by dCouriervideos

Volunteers are still needed for mountain bike-rider packet pick-up on Friday evening, April 29, as well as at each aid station during the races on Saturday, April 30, and Sunday, May 1.

To review volunteer spots available and/or to sign up at the link, visit: http://vols.pt/YA4Yws.