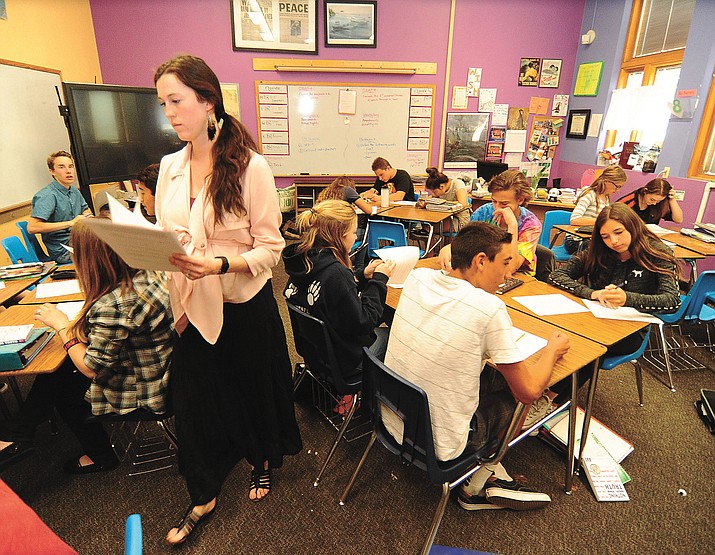 PRESCOTT – The decision voters make about Proposition 123 in next month’s special election will have direct impacts to students in classrooms statewide.

If voters approve it, Prop 123 will put an estimated $35 million into school budgets statewide, while a defeat means the state and educators will continue a protracted legal battle over education funding.

Many supporters of Prop 123 agree the deal has its flaws.

“We’re not saying it’s the perfect constitutional animal,” said Dick Foreman, president and CEO of Arizona Business and Education Coalition. “We’re certainly not saying this addresses all of the classroom needs – it does not.”

Humboldt Unified School District expects to get about $1.2 million in 2016-17 if Proposition 123 passes, and similar amounts over the next nine years.

If voters pass Prop 123, HUSD will likely spend the first $1 million on salaries, and carry the balance into the next year.

“It changes the base-level for pupil spending,” Streeter said. “It also allows us to look at restoring programs that had been cut over the years.”

Streeter noted the question before voters does nothing to address the cuts to capital funds from district budgets statewide.

For Prescott Unified School District, the outcome of Proposition 123 will determine how steeply school officials have to cut budgets.

When the education advocacy group Expect More Arizona calculated how much schools would receive, it looked like PUSD would get about $1.2 million. But recalculating with the district’s latest enrollment drops that figure is closer to $700,000.

Superintendent Joe Howard said that’s on top of about $1.2 million the district expects to cut due to a combination of declining enrollment and other changes in state laws.

He said the district will keep its promise to voters by giving a raise to its faculty and staff, funded by a voter-approved budget override last fall.

Kevin Dickerson, the district’s chief financial officer, added that the bond voters approved can fund only capital costs – purchase and maintenance of property like buildings and buses. Those dollars can’t offset shortfalls in other areas of the budget.

While Howard said the district won’t have to shutter schools as it did a year ago, a smaller budget will probably result in fewer employees, which in turn could lead to increased class sizes. He said the district faces that challenge whether Proposition 123 passes or fails.

Howard recognized PUSD has made repeated appeals to voters to support education funding, and he’s wary of defining specific impacts within the district.

“The more panic I create, the more teachers I lose and the more students I lose,” he said.

Both Streeter and Howard said the outcome of Proposition 123 is only the beginning of the process to improve how the state funds education.

“This really needs to be the first step in appropriately funding education in Arizona,” Streeter said.

One of the things it does accomplish is the settlement of a protracted legal battle brought by educators and school districts against the state in 2010.

Plaintiffs claim the state violated the voter protection provisions of the state constitution when the Legislature failed to provide inflationary adjustments set by voters in 2000 with Proposition 301.

If Proposition 123 passes, plaintiffs have agreed to settle the case, and the state won’t have to fund the back-payments owed schools.

“The settlement was made,” Howard said. “It was the governor who made it into an election.”

He’s referring to the Gov. Doug Ducey’s plan to temporarily change the allocation of funds from the state’s Permanent Land Endowment Trust Fund. Doing so requires a change in the state constitution, which must be approved by voters.

Opponents of Proposition 123 say they are worried about changing the constitution for a temporary adjustment, and they further cite triggers under the law that would give the state Legislature authority to lower the payout amounts.

“I very seldom see the Legislature pay attention to what the citizenry wants,” said Julie Watson, of Prescott, a lifelong educator and trainer, and member of the League of Women Voters. “Giving them latitude is not the direction we need to go as far as checks and balances.”

She said she agreed with the League of Women Voters for taking a stance against Proposition 123.

“I totally understand schools need money now,” she said. “But there’s no guarantees in Proposition 123 the money will go to the students.”

She said voting it down will create more pressure to more fully address the state’s education needs, and she expects it won’t require a multi-year legal battle.

“We as citizens can change legislators’ minds,” Watson said. “I think people are so sensitive to this issue that things would change quicker than that.”

Retired CPA John Cargill, of Prescott, said he worries about the impacts of using reserved funds to pay for current education needs.

“We just passed the bond and override,” he said. “Now we want to reach into the future and take an extra percentage down the road.”

Foreman said he’s heard similar opposition against Proposition 123 from both liberals and conservatives.

He said the left doesn’t think it goes far enough to support public education, while the right worries about the government overreach into reserved funds.

But he goes back to schools’ immediate needs.

“You have to be willing to throw kids under the bus to make your political voice heard,” he said. “Probably none of us would have solved the inflationary lawsuit with trust land money.”

But he noted the parties who brought the lawsuit are on board, and a federal judge has signed off on the deal.

Foreman said starting the day after the election, school officials and lawmakers need to work toward improving education funding.

“The reason Arizona gets passed over for expansion and retention is we are not devoted to our public schools,” he said.

He said no matter whether people support the mechanism, the objective is to support classrooms across Arizona.

“This is the deal that’s on the table,” he said.