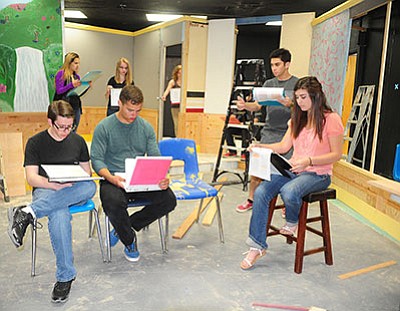 Chino Valley High School students have been making audiences laugh for a while now, performing comedy after comedy. Now, they want to branch out and move audiences in a different direction.

The school's next production is "The Clone People," written by Mike Johnson in 1978. It is scheduled for performance April 28-30 at the high school.

"Since my freshman year we do two plays and one shorter play in the middle of the year, and they've all been comedies," said Jordan Ownby, a senior. "So, I was like finally, 'Please Mrs. [Erica] Muse, let us do something dramatic.' And everybody was like, 'Yeah, please!'"

Ownby plays the character at the center of this play. She's a big star in Hollywood and happily married. But an accidental blow to the head brings back memories of another life. She and her husband begin trying to figure out where those memories came from and the more they unearth, the closer to dark secrets they come.

"We liked the thriller element, we've done a lot of comedies," said Muse, who is the drama teacher for the school. "We really wanted something more dramatic, and this one supplied all that we needed."

Muse said the biggest challenge so far has been the set, trying to recreate a wealthy Hollywood mansion on a stage that's half the size of what it was intended for.

She also said that doing a more dramatic play will test her young cast.

"I have to cry a couple of times in the play, and get hysterical," Ownby said. "In comedies, you feed off people's laughter, and hopefully no one will be laughing in this play, so it's hard to know if they're enjoying it."

"I'm usually the comic relief, but here ... I get to be mean," said senior David Lemcke who plays a greedy Hollywood executive. "I'm going to have to make them not like me, and that's going to be hard. Usually at the end of the play people are like, 'David you were so good,' and now they'll probably shun me."

The play is not one that most folks have seen, which Ownby said is appealing.

"We don't have a big cast, so we can't do big plays like 'Grease,' or 'High School Musical,' or stuff like that." she said. "We try to do plays that no one's heard of before, so they can come to see what the story is all about. Mrs. Muse likes to be original."

This is the final show for seniors who will be graduating soon.

"It's really sad," Ownby said. "It's just been such a big, time-consuming part of my life that it's going to be weird once it's all over. Everybody gets so close in here that by the end of it, it's hard to leave."