Chalk It UP! Prescott bigger than last year 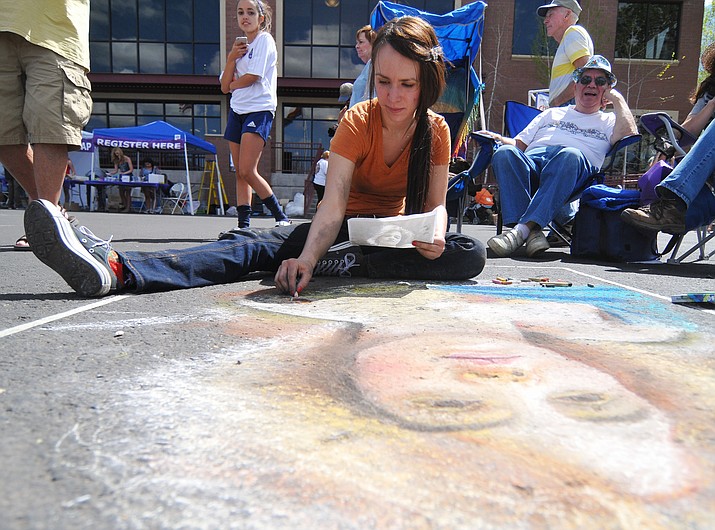 Chalk It UP! Prescott is April 16 and 17 in downtown Prescott.

There’s an artist in everyone, even if the medium just happens to be a something not common to most artists. Like chalk.

On Saturday and Sunday, April 16 and 17, the West Yavapai Guidance Clinic (WYGC) is hosting Chalk it UP! Prescott, now in its eighth year. Held from 10 a.m. to 4 p.m. at the National Bank of Arizona parking lot, 201 N. Montezuma St., this year’s event features more guest and featured artists than last year and is free and open to the public.

Chalk it UP! started eight years ago from the efforts of a group of friends and two years ago, WYGC got into the mix, said event organizer Tina Blake.

“It was a prime group of about eight ladies who got together, started the first Chalk it UP! and it has evolved from year to year,” Blake said. “Two years ago, they decided they couldn’t do it any longer … so they needed a nonprofit to maybe take it on and keep it going.”

Aspiring artists will be given a 12-piece box of pastel chalks and a 4-ft. x 4-ft. space to create a chalk masterpiece. Attendees are welcome to bring their own chalk as long as it is water-based. The event is also outside, Blake said, urging attendees to remember to bring things like sunscreen and hats.

This year will see more than 13 featured and guest artists, the largest so far, Blake said. There were a record number of 5,000 people in attendance last year and the same amount is expected this year she said. This year’s event also features a new photo booth area, a face painter, more than eight entertainers and one of the artists on the committee doing demonstrations and giving the kids more opportunities to learn.

The featured and guest artists are up for a People’s Choice Award as well with $150, $75 and two $50 prizes, Blake said.

The event is open to anyone, regardless of age. Even if people can’t get on the ground to “chalk up” their square, there will be tiles to fit on a lap. The guest and featured artists are also intermixed with the community artists, according to Blake. She noted that at other chalk festivals have the professionals in their own area separate from the community.

A decade of chalking it up
Chalk it Up! event continues today
Prescott chalk art festival set for April 18-19
Chalk It Up! Prescott returns for sixth year of art
Parking lot masterpieces: Chalk It Up! returns April 20-21