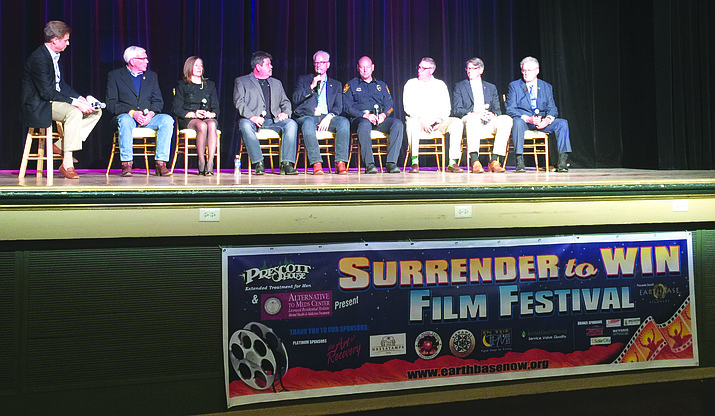 An eight-member panel discussed the opening film at the Surrender to Win film festival over the weekend.

PRESCOTT – The inaugural “Surrender to Win” festival opened the weekend with a provocative film about the business of treating addiction followed by a panel debate with community professionals about the recovery movement in this community.

“The Business of Recovery” makes no apologies for its premise that many treatment centers are not helping people toward recovery in a lasting way, rather the $35 billion industry is taking people’s money and raising false hopes. One mother spent $92,000 for treatment only to lose her young adult son to a heroin overdose three months after the film interviews.

The film takes a dim view of treatment centers that revolve their therapy around 12-step programs rooted in the Alcoholics Anonymous formula. The 12-step program was never intended to replace medically-endorsed treatment, but rather support between, and for, those suffering from addictions.

The film’s addiction experts suggested the only programs that work are those with a long-view toward recovery, ones that mix evidence-based medical science with the diagnosis of underlying mental health ailments with ongoing psychotherapy.

One expert emphasized that no addict should be forced into treatment, be it by parents or the courts. Individual success must be rooted in one’s personal willingness to get sober, and stay sober.

“If they’re not motivated to change, they won’t change,” declared Tom Horvath, the owner of a non-12 step-rehabilitation program in California who was interviewed extensively for this film.

Prior to the film presentation at the Elks Theatre Friday night, festival organizer Jeff Grubert of Earthbase Recovery said the entire purpose of the weekend was to “celebrate recovery” and to remove the shame stigma of addiction such that people in need are able to find the “compassion and support they need to get to the other side.”

The festival’s subsequent days offered a range of films that included one on sex addiction and the “anonymous people” or those who become entangled in the mire of addiction.

Whether people agree or disagree with the various viewpoints, Grubert said he hoped each would spark conversation that might save lives. Some 225 people participated in the festival that Grubert said he expects to repeat next year. He intends to have a folk music event later in the summer or fall.

The first festival selection clearly ignited some passionate responses, including that of moderator Sandy Kenyon, a New York City television reporter and recovering substance abuser who credits Prescott with his sobriety and leading him to a 24-year path to long-term recovery.

While the documentary’s featured experts make it clear there are some legitimate facilities, those with trained physicians and professionally-credentialed providers, they highlighted renowned places that rely on former addicts with no formal educational background to provide treatment, with mandatory 12-step meetings considered a part of that protocol. Fancy settings and fine dining do not make up for qualified personnel, said some of the interviewed clients.

A film critic, Kenyon said he found the documentary to be “one-sided” but at times found his “blood boil” over what appear to be “flim flam” operations.”

The eight-member panel of civic leaders, industry professionals, recovering addicts and community advocates offered mixed reviews on the movie, concentrating more of their remarks on local efforts to cope with the rise in recovery and sober living options in this community.

Police Chief Jerry Monahan said it is imperative communities have comfort that any treatment facilities, including the more than 140 sober living homes that have proved a concern to some neighborhoods in Prescott, are manned by qualified staff. He and others commended State Rep. Noel Campbell’s pending legislation that will require higher standards and monitoring of these homes.

Prescott House Executive Director Dayton Turberville was disturbed by some of the characterizations in the film. He was angered it puts a “black mark” on those who are trying to do good things for those in need of treatment. On the other hand, though, Turberville concurred that treatment centers need to have proper supervision and therapy practices.

Community advocate and Yavapai County Board of Supervisors candidate Mary Beth Hrin said she is neither a recovering addict nor a neighbor of a sober living home. Her objective is to assure a proper community balance. She said she shared the outrage of a family whose son died in an improperly supervised sober living home, but has also met addicts receiving much-needed treatment here.

She believes the industry must have regulations, and noted there are local providers who have “stepped up to the plate” to support Campbell’s legislation to assure such protections exist.

Mayor Harry Oberg said the city has become “saturated” and he believes Campbell’s bill will be a help. He said his first priority is to make certain the city has ordinances that protect everyone’s health, safety and welfare.

He favors requirements that sober-living homes have 24-hour awake staff that have proper training to deal with the clientele that come through their programs. Like other panel members, Oberg, too, wants these centers to have an “exit” strategy for clients beyond leaving them homeless out on the city streets.

Prescott’s problem did not occur overnight, and will not be solved overnight, Hrin said. But she believes city and state lawmakers, as well as professionals in the recovery field, are now coming together to find solutions that benefit the entire community.

“I think we’re moving in the right direction,” Hrin said.