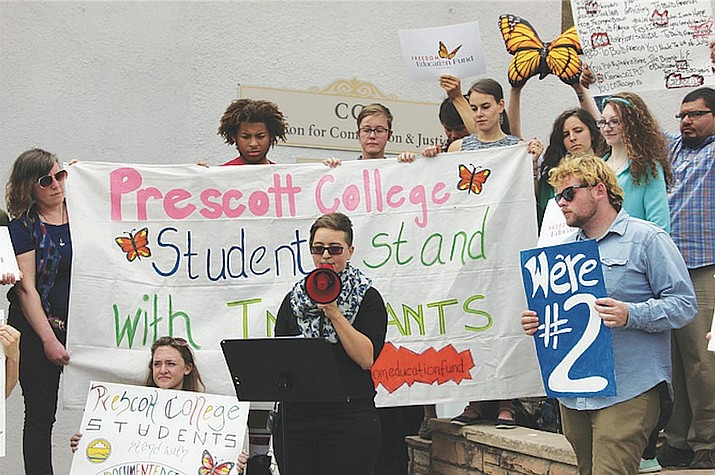 Miriel Manning speaks about her and her peers’ efforts to successfully establish a scholarship for undocumented students that will now be offered by Prescott College starting in the fall. (Photo by Max Efrein)

Chanting ‘Si, se puede’ (Yes, we can), the motto of the United Farms Workers lead by Cesar Chavez in the early 1970s, Prescott College students congregated on the corner of Gurley Street and Summit Avenue in Prescott on Thursday to publicly announce their successful campaign to institute an annual scholarship for undocumented students who wish to attend the college.

Called the Freedom Education Fund (FEF), the scholarship is supported by an optional $30 fee for all on-campus students that will take effect starting in the 2016-2017 academic year. A majority of the students currently attending the college signed a petition saying they’d agree to pay such a fee.

“This is a fee that students initiated, organized for, and won for our peers who need this financial assistance,” said Miriel Manning, founder of FEF and student in the Social Justice and Human Rights Master of Arts program.

The Prescott College administration has agreed to supplement the fee with institutional aid in order to offer at least one full ride to an undocumented student each year.

Recipients of the scholarship will be undocumented, full-time or part-time undergraduate or graduate students at Prescott College that demonstrate financial need, according to a news release. A qualified applicant for the fund must not be a legal permanent resident and not possess a green card, visa, or other legal documentation.

Some of the primary reasons listed by the student organizers for supporting undocumented individuals with such a scholarship are:

• Undocumented students are not eligible for federal or state loans.

• Many state universities charge undocumented students out-of-state tuition even if they have been living in the state long enough to have residency. Many other universities charge them international student tuition, which is much more expensive than in-state.

A commonly-asked question they addressed in their news release is whether or not it is illegal to give aid to undocumented students. The answer is such students are not expressly prohibited by law from admission to state colleges and universities. No federal statutes require disclosure and proof of immigration status and citizenship for students to enter higher education.

Natalia Albanese, one of the student organizers who helped to make the FEF a reality, said she strongly believed in the effort, considering it was a genuine way to further her, her peers and the college’s mission of social justice.

“The undocumented community needs more scholarships like this and needs more institutional support from other places as well,” Albanese said.

With the support of the college, Manning hopes to continue pushing this cause and eventually raise additional funds to support more full tuition scholarships for additional undocumented students.

“As we have learned from migrant student and racial justice movements across the country, we cannot wait,” Manning said. “We must actively create tangible, structural change. The Freedom Education Fund does this.”