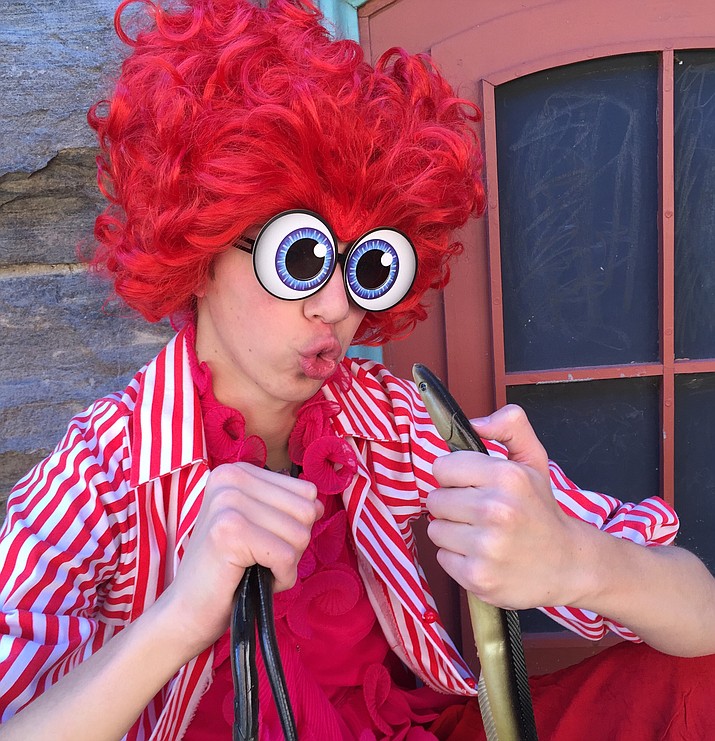 Tri-City Prep student Alex DuBroy not only serves as an actor, playing the part of the wacky eel-eating Hoti in one of the 11 short plays at the 6th Annual Young Playwrights at the PCA this Sunday April 10, but also is a selected playwright who wrote the second place winner "The Chamomile Catastrophe".

It’s time once again to see the potential of young playwriting students with Prescott Center for the Arts’ Young Playwrights Festival (YPF). Held on Sunday, April 10, at 2 and 6 p.m. at the PCA, 208 N. Marina St., this is the sixth year for the festival, which will feature 11 plays written by students of various grade levels from all around the state. Admission is $10 at the door.

This is the final year that Jon Meyer is acting as Festival Chair after having done so for all five previous years. It’s bittersweet to some degree, Meyer said.

“I wanted to make sure the event this year happened the way it’s supposed to happen. I had several people who were very generous in expressing to me their hope that I would choose to chair the event this year to help with the continuity and bridge to next year,” Meyer said.“It was really wonderful to get that kind of support from the people who have been doing YPF with me, a couple of them from the beginning, to know that they were giving me their support and had my back. That was a very nice thing to go through at the time.”

The three winners will get cash prizes and trophies, Meyer said. There will also be trophies and more cash to whoever wins the Grand Prize Award as well as the Audience Choice Award. Winners will be announced at the 6 p.m. showing.

For the second year, Meyer will direct a play of Lanning’s. He has seen a growth in Lanning’s work since last year’s musical. This year, the student has written a play about a moral dilemma.

Meyer is also directing Neese’s play. Neese comes from a strong theatrical background, Meyer said, noting the play is very theatrical and very funny. He was able to get Julian Jenney and Danielle Plaso, who played the leads in “Barefoot in the Park,” for the show.

Other playwrights who have repeat productions this year include Dodt and Reyna Sanchez.

“It’s really cool. We have these kids who come back year after year who keep writing,” Meyer said. “It all depends on the submissions that we get as to whether or not their show gets produced.”

The panel that selects the plays reads the submissions blind, Meyer said. They know what grade the student is, but they don’t know who wrote it. The same goes for when choosing who is going to direct which plays, he said.

This year is also the first time in six years that Meyer is taking a role in one of the plays as well, playing the part of a theater director.

“I’m having a ball with that,” he said. “I thought it was a fun thing to do to finally take the step and actually be on stage in one of the shows.”