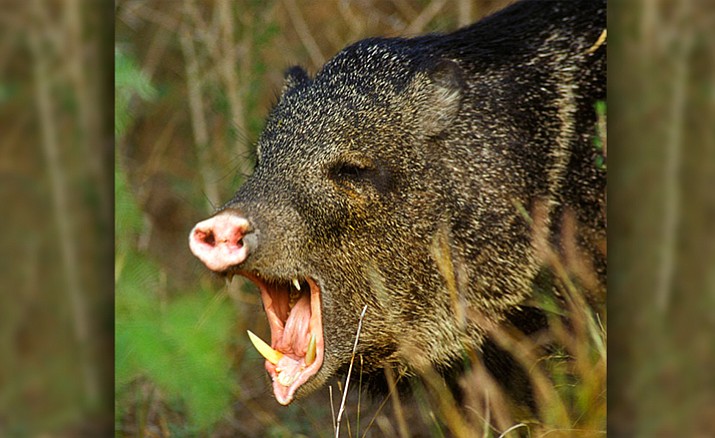 Feeding wild animals, such as javelina, can invite trouble including attacks - considered “a public safety issue,” at least one person told the Prescott City Council on Tuesday.

PRESCOTT – A new ordinance that would ban the feeding of wildlife in Prescott got mixed reviews from the Prescott City Council and the public this week.

Maintaining that feeding wildlife may attract uncontrollable numbers of animals that could damage property and disrupt surrounding residents, the ordinance would make it illegal to “intentionally, knowingly, or recklessly feed wildlife or to attract wildlife.”

The ordinance would make exceptions for a number situations, including:

• Public employees who are acting within the scope of their authority for public safety or wildlife management purposes.

• A person feeding his/her own horses or domestic animals.

• Seeds or nectar for birds or squirrels placed in a feeder that is at least four feet above the ground.

• Plants in gardens or fruit-bearing trees.

• Hand-feeding of ducks or water fowl on lakes or ponds.

Penalties for violation of the ordinance would involve a written warning on the first instance, and a fine of as much as $150 for another violation within 60 days. A third violation would come with a fine of between $150 and $300. Further violations within 180 days would be a class three misdemeanor.

Several residents spoke in favor of the ordinance, maintaining that neighbors’ regular feeding of wildlife had caused problems in their neighborhoods.

Resident John Allen, who told the council in October 2015 that a herd of javelinas had attacked his wife and dog while out on a walk, maintained that the matter is “a public safety issue.”

Along with the javelina problem, Allen said, a neighbor’s regular feeding of wildlife had also attracted two mountain lions to his yard. “I have an 11-year-old daughter who will not go outside anymore,” Allen told the council.

But resident David Norcross cautioned the city that the ordinance could affect residents who like to attract birds to their properties, as well as businesses that cater to birdwatchers.

Councilman Greg Lazzell pointed out that the city had just heard a report earlier in the meeting from Prescott Police Chief Jerald Monahan about the possibility of cutting more police staff positions.

“This would just be making another burdensome law that is unenforceable,” Lazzell said, adding, “We live in the forest; we have wild animals here.”

Councilman Steve Sischka also expressed concerns, noting, “Every time we put our trash out in the night, we’re feeding the wildlife. I think this is a slippery slope. We’re getting into some territory where there’s unintended consequences.”

But Councilwoman Billie Orr maintained that the ordinance is well-planned, and “We should be responsible on this issue.”

She added that some adjustments on the wording could help to allay the concerns about a “slippery slope.”

Mayor Harry Oberg suggested that the city should have an ordinance “for the people who are irresponsible.”

The draft ordinance generally mirrors regulations already in effect in Flagstaff, according to a city memo.