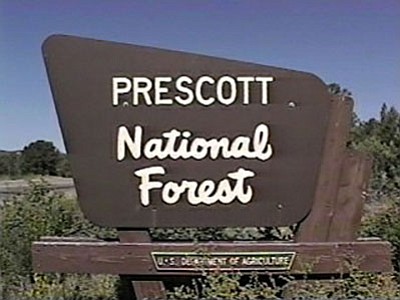 The public has an opportunity to comment on a proposed plan of the Drake Cement Plant to extend its storage site of overburden materials to an adjacent 80-acre parcel on the Prescott National Forest (PNF). The deadline for comments is April 22.

Drake Cement LLC runs a limestone quarry on 55 acres of PNF about five miles north of Paulden and one mile east of Highway 89. The cement plant sits on private land east of the quarry. Currently its overburden, defined as material that overlies the deposit of useful materials, needs more storage space than originally estimated. Drake's overburden consists of basalt flows and alluvial deposits.

Drake is asking PNF for permission to use an additional 80 acres adjacent to, and immediately north of, the quarry on which to store the overburden. The 80 acres are located on Drake's placer mining claims, which PNF must administer under several laws, mining acts and regulations.

According to the Schedule of Proposed Actions report of the United States Department of Agriculture (USDA), Drake and the Forest Service have looked at alternatives to handling the excess materials. Selling it to a third party or using it to reclaim existing open pits are not viable because of the high cost of hauling it to the pits and the lack of a local market demand for the material.

In the original 2006 Environmental Assessment Report, Drake intended to use the overburden to fill in portions of the quarry as sections were mined out. According to Kevin Weldon, project lead with PNF, the company is keeping that option open. Once Drake stops operation at the quarry, it will move the stockpiled overburden material into the quarry to reduce safety hazards there.

"They maintain stockpiles for reclamation purposes," Weldon said, adding that the storage piles, once they are moved back into the pit to safe standards, will reduce the depth of the quarry.

Drake estimates the capacity of the proposed overburden storage site at 3 million tons. The company plans to transport about 150,000 tons per year by truck traveling about 1,800 feet to the site. Where feasible, it will remove portions of the overburden to the quarry. It will grade the piles, take slope erosion protection measures and seed the soil. The project would begin in early 2017 and continue for about 17 years or until operations at the quarry have been completed.

Officials at Drake Cement declined to comment on the proposed action plan.

The Drake Cement plant was the first new cement plant to be built in Arizona since 1959. The 2006 assessment report states that limestone mining at this location has been around since 1880. Historic mining activities and numerous existing roads are evident in the vicinity. Cement is made up of four compounds: limestone, iron, silica and alumina.

Based on public comments received, PNF will determine whether significant public issues or concerns exist. "Comments should be as fully formed and specific as possible to assist us in the analysis. Although comments are welcome at any time, they will be most effective if received by April 22," PNF states.