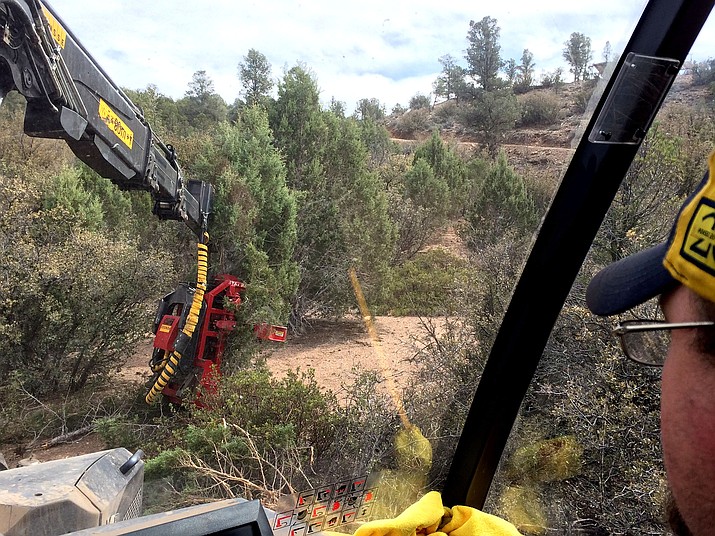 Ponsse equipment operator Phil Kiefer, 39, cuts down a juniper as part of a project to clear pinyon-juniper woodlands and study different harvesting methods for a potential biomass market.

The tree harvesting arm on this Ponsse machine stands ready to clear juniper from the Cross U Ranch as part of a demonstration.

Massive scissor blades and a quick twist decimated hundreds of junipers on a section of ranch property 20 miles northwest of Prescott. The machinery’s harvesting arm was specially created for the Arizona grassland restoration project, and potential biomass industry, by Ponsse, a company out of Finland that builds heavy-duty forest machinery.

A demonstration of the Ponsse equipment took place March 11 at the Cross U Ranch west of Williamson Valley Road. Other demo events in Yavapai County took place on the K4 Ranch and Double O Ranch.

A partnership between the Arizona State Forestry Division, Upper Verde River Watershed Protection Coalition (UVRWPC), and local ranchers brought the Ponsse equipment to Arizona to test whether it is more economical to remove junipers and pinyons with machinery or by hand crews. The results will help interested biomass industries determine whether a biomass production business is economically viable.

John Munderloh, Town of Prescott Valley Water Resources manager and chair of the UVRWPC Technical Advisory Committee, oversees the project. Cutting junipers helps the forest, much of which is overgrown, he said. With 14 million acres of woodland, he foresees that restoration could “incentivize private business” with possible biomass factories and industry coming into the region near Paulden.

Regardless of whether biomass industry is feasible, clearing junipers has other benefits, Munderloh said. If the woodlands experience catastrophic wildfire, there is a potential loss of all habitat. Such a fire would burn hot enough to sterilize the soil and destroy seed-stock and various soil microbes, he said, and create conditions where nothing protects the soil from erosion.

“Once the soil is lost, the chances of re-establishing the beneficial plants is also gone,” Munderloh said.

Low-intensity wildland fires, however, keep junipers and pinyons from encroaching in grassland areas. Such fires are beneficial and keep the plant mix in its proper balance. In the areas that are supposed to be open grasslands, the low-intensity fire would take out the small junipers every 7-10 years or so, he added.

Gary Parrott, retired rangeland management specialist for Northern Arizona with Natural Resources Conservation Service, has been involved with vegetation manipulation projects for 23 years. He, too, said when a natural disturbance, such as fire, is eliminated, some species like juniper will become established in grassland.

Juniper and pinyon will grow in favorable conditions, mature into old trees, and then die. When conditions change, they don’t grow back. Soil, topography, climate and natural disturbance (such as fire or cattle grazing without seasonal rest) affect land that is always trying to reach its potential plant community, Parrott said. “If you are on a site that is potentially a woodland, you cannot remove the tree species and expect it to become grassland. You may be able to keep it a grassland with periodic input of energy and funding, but it will always be trying to return to its potential.”

From where does the money for this reforestation project come?

The Upper Verde River Watershed Protection Coalition (UVRWPC) funds come from membership dues from Yavapai County, Chino Valley, Prescott Valley, Prescott, Yavapai-Prescott Indian Tribe and Dewey-Humboldt. Since its inception in 2006, the Coalition has received $1.385 million from six entities, half of which have dropped out.

The Town of Chino Valley contributed a total of $66,666, with its last payment made in FY10-11. The Town of Dewey-Humboldt dropped out after FY08-09 after contributing a total of $12,000. Yavapai-Prescott Indian Tribe has paid dues for eight years with a total of $3,800.

The Coalition also wants to study whether removing juniper and pinyon will allow rainfall to permeate the soil and recharge the underground water aquifers. However, a review of scientific studies had varied results. “We’re still pursuing grant money to study the hydrologic effects of vegetation management,” Munderloh said.

“The water-savings value of clearcutting juniper and oak in our semi-desert grasslands has been thoroughly debunked. If there was a desire to return the grasslands back into their native and more absorbent state, it would be to remove cattle and allow enough fine fuels to return to carry fire,” Campbell said.

Still, removing trees will increase the growth of grass, which ranchers can appreciate, he added.

The UVRWPC’s newsletter, called Yavapai Water Smart News, January-February 2016 issue, appears to agree that recharge will probably not occur with removal of juniper. It states, “Recharge from vegetation management likely will not occur directly beneath grasslands. However, dormant winter grass cover will allow for a wetter soil (compared to evergreen woodlands) that will increase the volume of runoff while the grass itself slows the release of that runoff and increases the total volume available and the opportunity time for recharge to occur.”

Through partnerships and grants, the Coalition hopes to bring industry to the area in the form of creating a new source of energy from juniper and pinyon vegetation. The Ponsse machine can clear 25 acres per day of juniper and scrub oak.

Sgt. Joe Courteau, Arizona Department of Corrections, said on flat ground his hand crews can equal what the Ponsse does. He supervises the Winslow inmate wildland crew that was at the Cross U Ranch piling tree limbs onto slash piles.

“This is an excellent bunch of guys. They work harder than any I’ve come across,” Courteau said. “But on the hillsides, this machine works circles around us.”

The newsletter reports that, generally speaking, it takes about $200 per acre to treat vegetation. If the Ponsse equipment proves economically efficient, there could be an opportunity for industry to build a factory, cut the juniper and pinyon, get the downed trees or chipped wood to the factory, and transport the resulting pellets by truck, train and ship to the product users.

According to Yavapai County Supervisor Craig Brown, a company in Korea has expressed interest in purchasing the wood pellets.

Time will tell whether private industry will make such an investment. Dr. Gary Beverly, Sierra Club, has concerns about emissions from burning wood for energy use.

“The emissions change depending on the combustion method. There should be no smoke, which is unburned hydrocarbon particles that indicate incomplete, inefficient combustion,” Beverly said.

The Clean Air Act regulates fossil fuel combustion, but he said it’s unknown how the Arizona Department of Environmental Quality will handle the technicalities of biomass combustion for power production.

“That question hasn’t come up yet in Arizona,” Beverly said.

Forest vegetation removal could conserve more water
Ranchers a big part of watershed management
The need for forest clearing
Juniper chips going wattle, wattle, wattle all the way home?
Biomass: What is it and why should we care?