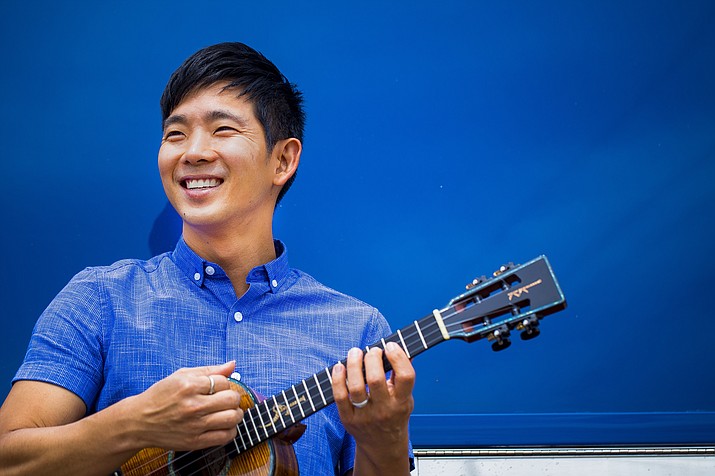 The melodic sounds of the ukulele will fill the air inside the Yavapai College Performing Arts Center, 1100 E. Sheldon St., as Jake Shimabukuro returns to Prescott for a performance on Wednesday, April 6, at 7 p.m. A YouTube sensation who became an international star with a rendition of “While My Guitar Gently Weeps,” Shimabukuro performs a mix of cover and original songs. Tickets range from $35 to $55 and are available online at www.ycpac.com.

Shimabukuro started playing the ukulele when he was a kid around 30 years ago and there’s quite a lot of love surrounding his playing, he said.

“Growing up in Hawaii, everyone plays it,” Shimabukuro said. “It would be weird if you’ve never picked up a ukulele if you’ve lived in Hawaii your whole life.”

Shimabukuro loves the experience and education that comes with traveling all over the world for performances. With music as a passion, he gets turned on to new artists and different kinds of music when he goes to new countries, Shimabukuro said. Cultures inspire and lead to the creation of new things alongside familiarity with the unfamiliar, he said.

When it comes to writing new songs, Shimabukuro finds inspiration everywhere, writing a lot when he comes back from a trip. Upon return, he can evaluate everything that was absorbed during the tour. Still though, he also enjoys playing covers of songs he grew up with.

“It’s nice to play songs that people recognize and you make that immediate connection. People who aren’t familiar with the ukulele, you play a song they’re familiar with, it helps to bridge that gap,” he said, noting that when he goes to another country, he figures out a popular song or old classic from the area. “I’ll throw a song in and it’s amazing the way they respond to it … They’re hearing a song that’s been played on their traditional instrument culturally on the ukulele. It’s a nice way to make a strong connection, especially when there’s that language barrier.”

Shimabukuro also has a new album coming out in the fall. There’s a lot of excitement for it as there’s a whole bunch of new songs on it, he said. It comes after a recently released album, “Live in Japan,” that was recorded at one of his concerts last year.