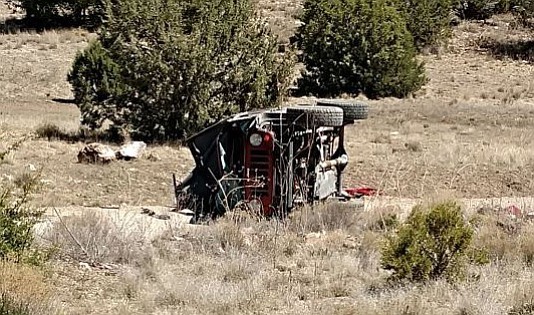 One man was killed and two boys injured in this Jeep rollover that happened Sunday about 13 miles east of Chino Valley on Perkinsville Road.

PERKINSVILLE – The man killed Sunday, March 3, in a Jeep rollover crash on Perkinsville Road east of Chino Valley, has been identified as Zachary Geise, 23, of Cave Creek, according to sheriff’s spokesman Dwight D’Evelyn.

Also involved in the rollover were two passengers, boys 14 and 17. They were not seriously injured, D’Evelyn said.

One of the boys told Yavapai County sheriff’s deputies that, “While travelling about 45 mph and heading downhill, Geise was using his smart phone to control the radio while driving. It was at this time the Jeep entered a violent roll. Deputies noted that Geise was approaching a marked sharp right turn in the roadway,” D’Evelyn said.

Geise was not wearing a seat belt, they two boys were, and when the vehicle rolled, the 17-year-old said that Geise landed on top of him.

The boys cut out the back window, which was made of vinyl, and escaped the wreckage. They saw Geise with serious head injuries and believed he was dead.

After some difficulty in getting a wireless signal, the boys called for help.

The boys were treated and released to their parents.

Early indications are that Geise was distracted and driving too fast, D’Evelyn said. There was no evidence of impairment, he added, but authorities are waiting for the Medical Examiner’s report to confirm that.

ORIGINAL STORY: One person was killed and two injured in an off-road vehicle crash outside of Chino Valley off Perkinsville Road early Sunday morning, April 3.

Preliminary reports indicate the 23-year-old driver of an off-road vehicle was killed after some type of crash. Passengers in the vehicle, one 17 years old and one 14, survived with non-life-threatening injuries.

The YCSO accident investigation team and evidence technicians remained on the scene throughout Sunday. Further details are likely in the next couple of days.