Man rescued after being pinned under a car 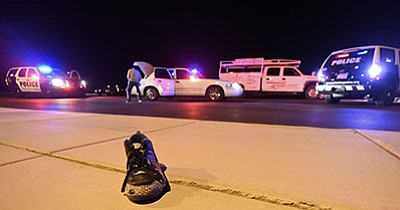 Prescott Valley Police Officer Matthew Cahill an accident reconstructionist inspects a crosswalk where a 20-year-old man was hit and pinned by a car, left, Friday night April 1, 2016 at the intersection of Lake Valley Rd. and Lakeshore Dr. in Prescott Valley. (Matt Hinshaw/PNI)

A 20-year-old man was taken to a Phoenix hospital Friday night after being struck by, and pinned under, a car near the intersection of Lake Valley Road and Lakeshore Drive in Prescott Valley.

Central Yavapai firefighters, Lifeline Ambulance, and Prescott Valley police responded to the scene and freed the trapped man from under the vehicle. He was transported to Yavapai Regional Medical Center East. He was then flown to Phoenix.

According to Prescott Valley Police Sergeant Jason Kaufman, the victim suffered moderate injuries. No other vehicles were involved. Lakeshore Drive was shut down between Windsong Drive and Main Street. The accident is under investigation.