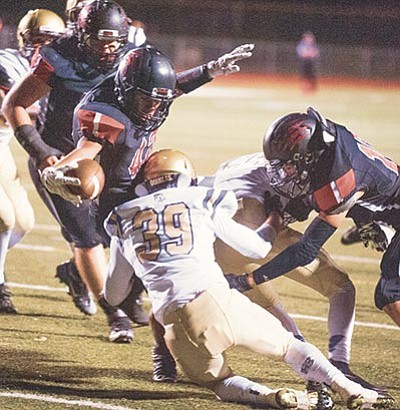 If the Division III state football playoffs started this Friday, Bradshaw Mountain High would qualify, while Prescott would be huddled on the outside looking in at the 16-team field.

Prescott came in at No. 27 with a 4-1 record, identical to the rival Bears. The biggest difference between the two teams' ratings lies in strength of schedule.

Bradshaw's lone loss came against D-III No. 4 Arcadia (4-1) in Week 1, while the Badgers succumbed to D-III No. 23 Thunderbird (2-3), 28-20, in Week 2. Bradshaw blistered T-bird, 38-13, this past Friday, Sept. 25, in Prescott Valley. The Bears also have quality wins over D-II No. 22 Shadow Ridge and D-III No. 20 Notre Dame Prep. Prescott has victories over winless North Canyon and Moon Valley, and has beaten Camelback and Greenway, who have one win apiece.

Nevertheless, Bears coach David Moran said he isn't focused on rankings in the middle of the season.

"I wasn't even sure what we were ranked," he added. "It (our ranking) will mean something in games eight, nine and 10. Right now, our kids are focused on what we want (another section title)."

Bradshaw and Prescott begin the D-III, Section VIII portion of their schedules Friday, Oct. 2, on the road. The Bears visit No. 22 Mingus Union (4-1) in Cottonwood, while the Badgers lock horns with No. 39 Coconino (3-3) in Flagstaff.

"Mingus is a very good football team," Moran said. "I have a ton of respect for (longtime Mingus coach) Bob Young. It is going to be a good, hard-fought football game. We are going to have to earn a win. It's a big game, and our kids know it."

The D-III state playoff field is comprised of nine automatic bids (each section champ) and seven at-large qualifiers based on the final rankings at the end of the regular season. The single-elimination playoffs begin Nov. 6 (first round), continue Nov. 13 (second round) and Nov. 20 (semifinals), and conclude Nov. 27 (finals).

Prescott and Bradshaw's best chance to advance to the postseason is to win the section, mainly because the strength of their schedules likely won't favor either team in trying to attain an at-large berth.

What follows is a synopsis for where the other teams in The Daily Courier's coverage area are listed in the season's initial power-point rankings, which the AIA will update and release every Tuesday morning for the rest of the 2015 season.

Chino Valley snapped a 13-game losing streak dating back to a winless 2014 season in fine fashion, posting back-to-back victories in weeks 4 and 5 against Sedona Red Rock (3-2 overall) and Tuba City (0-4).

The Cougars (2-3), who debuted at No. 30 in the Division V standings released by the AIA on Tuesday, visit rival Camp Verde (1-4) Friday, Oct. 2, for their D-V, Section III opener. The Cowboys are ranked 32nd.

But there's some good news for the Sultans, who are 5-1 overall. Their lone loss came against a Pima squad that's unbeaten at 6-0 and ranked No. 1 in the first D-VI ratings released Tuesday.

The Sultans visit No. 8 Glendale Prep (4-1) for another tough tilt Friday, Oct. 2, in Section III play. Both teams are 1-0 in section.

Mills says that because Valley Union faces Pima this week. Valley Union must also play St. David, and St. David has to take on Pima before the regular season ends. If Bagdad wins out, it should be able to maneuver past either Valley Union or St. David in the rankings.

Bagdad and Pima beat up each other pretty well this past week, Mills said, in a tough-nosed, physical contest. The Sultans came out of it relatively unscathed, though, primarily with the customary bumps and bruises. Mills believes Bagdad would have beaten Pima if not for committing four turnovers and struggling with penalties.

As for the D-VI state tournament, the division's five section champs will automatically qualify for the 12-team playoffs. Seven at-large teams, based on overall final ranking, will complete the bracket. The tourney will then be seeded based on teams' final rankings.

Squads seeded in the top four at the end of the season will receive a first-round bye into the single-elimination state tournament that starts Saturday, Oct. 24. The playoffs continue Oct. 31 (second round) and Nov. 7 (semis), and end Saturday, Nov. 14, with the championship game at Maricopa High in Maricopa.

Division VI No. 18-ranked Mayer (2-3 overall), which is on a two-game losing streak, returns home Friday to tackle No. 26 Fredonia (1-4) at Mathern Field in Spring Valley.

Mayer will conclude the regular season Oct. 16 when it hosts defending D-VI state champion and current No. 9-ranked Mogollon (4-1). The playoffs may not be out of reach just yet for the Wildcats.