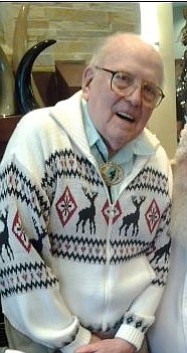 Donald Edward Densford Sr., age 89, passed away peacefully in Prescott on Sept. 8, 2015, after a brief illness.

Born in Salina, Kansas, to James Washington and Pearl Densford, he attended the U.S. Merchant Marine Academy in New York before being commissioned into the United States Naval Reserve.

Private services have been held.