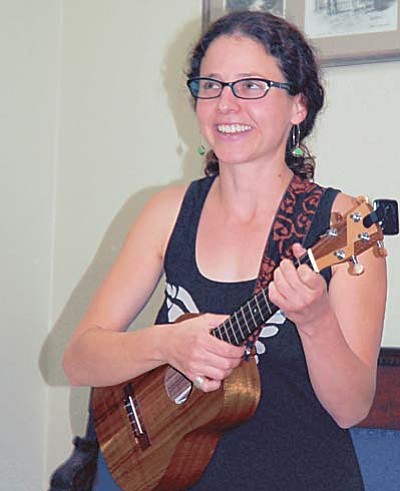 Sue Tone/The Daily Courier<br>Marieke Slovin performs three of her original story-to-song compositions at the High Noon Toastmasters Open House Sept. 9. She will play her music Friday from 7-10 p.m. at the Black Hole in Prescott.

Slovin, a Prescottonian since November, uses her story-to-song skills to make music with a ukulele and her rich alto voice. Sometimes she works with material from oral history recordings, sometimes straight from living subjects. She takes the verbatim script, adds breaks in sentences, and shapes the words into a poem. Then she has the person read the story/poem aloud to hear their cadence and how the words fall.

"I ask them to sing it and listen for a melody. Sometimes there is no tune," Slovin told a group of Prescott High Noon Toastmasters and guests at the organization's Open House on Sept. 9. She said the first time she sang someone else's story, she was so scared, she hid behind a curtain.

Most often, people's stories touch upon universal concepts that resonate with listeners as well as the storyteller. One woman, a new mother, talked about how her identity was shifting, and how her expectations of motherhood differed from what friends and family were telling her.

"She said, 'This isn't what I want to be as a mother,'" Slovin said. That story became "Canyon Song," the first of three songs she performed.

Slovin also wrote a Valentine's Day song at the request of a husband, and surprised his wife with a performance of the original song during their dinner at a restaurant. The composition came from his dialogue about the 14-year love affair he had with his wife.

"Partway through, she figured out what was happening and she started weeping," Slovin said. "Then she asked me to play it through again."

Trained in classical music where one played compositions exactly as written, Slovin worked for 10 years as a park ranger in Washington, Alaska and Lowell National Historical Park in Massachusetts. During her two years in Lowell she spent time going through 1980s filmed interviews of mill workers as the mills were shutting down. From those stories, she composed "I was a Mill Worker."

"I felt a strong connection with them. They said their co-workers were like their second family, so when the factories closed, it was like their life was torn away from them," she said.

Slovin earned a doctorate degree in sustainability from Prescott College; yet four years ago, she felt she had no sense of balance and that her own way of life wasn't sustainable. During this time, she rediscovered her love of music, and used it in a realm where she could be herself and write for herself. She learned how to play the ukulele - an instrument far more transportable than, say, a grand piano - and began composing her own songs. She especially likes that the creative process she uses now with others is a shared process, albeit not a lucrative business, she said with a laugh.

Slovin also shares her love of music beyond her business, Guiding Song, at local venues. She will perform Friday, Sept. 25, from 7 to 10 p.m. at the Black Hole, 1590 Swenson St. in Prescott.