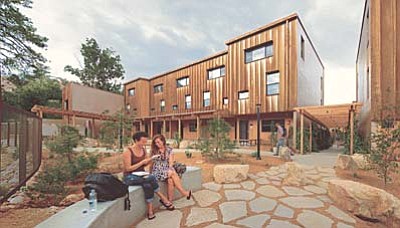 Prescott College's first new housing project, named The Village, has received a 2015 Environmental Excellence Award in recognition of the building's unique features and LEED Platinum certification, the highest level in the standard developed by the U.S.

Some of the building's environmental highlights include:

• Energy Efficient design that has performed at 15.5 kBtu/sf/yr for first year energy use of all building systems

The Village, opened in Fall 2012, is a $7.4 million facility that has an indoor area of over 27,000 square feet, with each of the three buildings divided into 4-5 multi-level apartment units housing up to eight students, and two staff units, for a total of 104 residents.

So far, The Village is the only building in Yavapai County to have received a LEED Platinum certification.

"For a college that has at the core of its mission environmental sustainability and social justice, that's a big deal," said Peter Sherman, sustainability coordinator for the college.

The Leadership in Energy and Environmental Design (LEED) certification is determined by the U.S. Green Building Council (USGBC) and based on evaluation of several key areas of design for sustainability: site development, water efficiency, energy efficiency, materials selection and indoor environmental quality. It is the accepted standard for green building certification across the nation and is also commonly used in other countries around the world.

Arizona is tied with New York in tenth place nationally for LEED certified buildings, which set the competitive price scale for commercial and institutional real estate in major metropolitan areas, according to USGBC.

When designing The Village, those collaborating on the effort kept in mind many components.

One was limiting the impact on the surrounding environment while in the construction phase.

"There are some large Ponderosas on the site that we kind of designed the project around to make sure we can protect those and also try to make sure that we were maintaining a good relationship along the edge of Butte Creek there," said Phillip Weddle, co-owner of Weddle-Gilmore.

Another consideration was the building's purpose and how it would best serve its eventual inhabitants.

"It was designed so that people naturally congregate in hopefully meaningful ways," said Sherman. "It's bike friendly, people friendly, and designed for maximum interaction, engagement and collaboration."

Despite the steep upfront cost of building such a facility, Sherman believes the energy and environmental savings accrued over the building's lifetime will more than make up for the expense.

"Even though Prescott College has been struggling in a whole host of ways, this was a great investment for the institution," Sherman said.