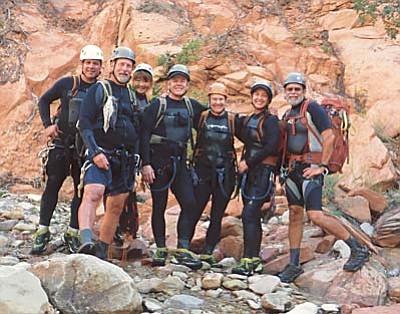 ZION NATIONAL PARK, Utah (AP) - Some in the group of seven hikers were new to climbing and swimming through narrow canyons when fast-moving floodwaters trapped them in a popular sandstone gorge in southern Utah's Zion National Park.

The park named the men and women, six from California and one from Nevada, who died when a flash flood rushed through the canyon earlier this week. Their identities were released after rescuers traversed a 100-foot drop into a rugged terrain to find the last victim's body.

Authorities also recovered the body Thursday of a 33-year-old man killed by flooding near the Utah-Arizona border, raising the death toll to 20 from the violent rainstorm that hit Monday. At least 12 other people, including nine children, died in a nearby polygamous town when two cars were swept away. A 6-year-old boy is still missing.

Though some of them were new to the sport of canyoneering, park policy prevents rangers from assessing their skill level or stopping them from entering canyons, even after repeated warnings of flood risk Monday.

The park is investigating what led to the deaths and reviewing its policies, but the process for canyon entry permits is decided at the national level and any changes would likely need to come from the top down, Zion spokesman David Eaker said.

The seven hikers were clambering through a popular canyon when a deluge seen only once a century unleashed a wall of churning water. The flooding likely rushed over their heads in moments and carried them miles downstream, Eaker said.

"It would be just like a drain, it just funnels down in there very quickly, very fast," he said.

Officials believe the group entered Keyhole Canyon late Monday afternoon, after some of those new to canyoneering took a course, he said. The route is considered entry level, according to canyoneering experts.

The group was told of the danger of flash flooding when they got their entry permit, a common warning during the rainy season, park officials say. They decided to go anyway.

Rangers closed the park's canyons after the storm hit, but there was no way to warn those already inside the majestic slot formations, which can quickly fill with rain water and leave people with no escape.

Aside from one spot near the canyon's entrance, "there really is no high ground. You're in a slot pretty much the whole way," Eaker said.

Sgt. Steve Arthur and his wife, Linda, were part of the group, the Ventura County Sheriff's Department in Southern California said this week. He was a 21-year veteran of the department and was selected in 2005 as public servant of the year by the Camarillo Chamber of Commerce.

"He was one of those guys whom everyone liked," sheriff's Capt. John Reilly said.

In 1999, local Kiwanis Clubs named Steve Arthur an officer of the year and gave him a Medal of Valor for trying to save an accident victim in a burning vehicle, the Ventura County Star reported (http://bit.ly/1QkXAnP ).

The Arthurs' neighbor, Ronald Ormsby, 84, said the sergeant would frequently go with his wife on weekend camping trips with their trailer, sometimes taking their bicycles.

"You just couldn't imagine people who were better neighbors, and they were wonderful to everybody," Ormsby told the newspaper.

South of Zion, the body of Ryan Daniel Mertlich, of Hurricane, Utah, was recovered about 7 miles south of the Utah line and 6 miles from where his heavily damaged vehicle was discovered in a flood plain, authorities in northwestern Arizona said in a Friday news release.

Mertlich's family reported him missing Tuesday, saying he typically drives the back roads in the area, the Mohave County sheriff's office said. He was last seen Monday evening when he left a relative's house in the St. George area to return home.