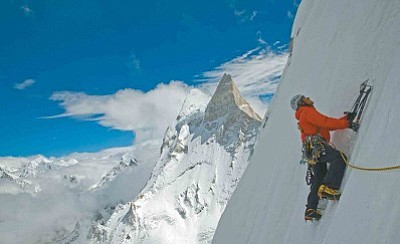 Three renowned climbers navigate nature’s harshest elements and their own complicated inner demons to ascend Mount Meru, the most technically complicated and dangerous peak in the Himalayas in the critically-acclaimed winner of the Audience Choice Award for Best Documentary at Sundance “Meru”.

Three renowned climbers navigate nature's harshest elements and their own complicated inner demons to ascend Mount Meru, the most technically complicated and dangerous peak in the Himalayas in the critically-acclaimed winner of the Audience Choice Award for Best Documentary at Sundance "Meru".

In the high-stakes pursuit of big-wall climbing, the Shark's Fin on Mount Meru may be the ultimate prize. Sitting 21,000 feet above the sacred Ganges River in Northern India, the mountain's perversely stacked obstacles make it both a nightmare and an irresistible calling for some of the world's toughest climbers.

In October 2008, renowned alpinists Conrad Anker, Jimmy Chin and Renan Ozturk arrived in India to tackle Meru. Their planned seven-day trip quickly devolved into a 20-day odyssey in sub-zero temperatures with depleting food rations. Within 100 meters of the elusive summit, their journey - like all previous attempts - fell short of the goal.

Heartbroken and defeated, the trio returned to their everyday lives, where the siren song of Meru continued to beckon. By September 2011, Anker had convinced his team to reunite and undertake the Shark's Fin once more, under even more extraordinary circumstances.

"Meru" is the story of that journey, an expedition through nature's harshest elements and one's complicated inner demons, and ultimately on to impossible new heights.

The Hollywood Reporter calls the film "exhilarating!" Newsweek says it is "absolutely worth the climb!" People Magazine says "Meru" is "cinematically stunning!" Variety raves "engrossing, hair-raising ... a nail-biter!" and The Playlist calls the film "a moving tale of super human perseverance!"

Currently, 50,000 wild horses are in government holding facilities in the United States awaiting adoption. Many will languish there, largely because of their reputation for being unpredictable.

After taking mustangs on a pack trip and watching them outperform their domestic counterparts, Ben Masters, a young Texas horseman, wanted to prove the worth of wild horses and raise awareness about their plight. He gathered three of his best friends and hatched an outrageous plan to adopt, train and ride wild horses 3,000 miles from the Mexican border to Canada through some of the American West's wildest terrain.

Expertly woven with gorgeous cinematography, interviews with wild horse experts and just the right dose of levity, "Unbranded" is a soaring tale of resilience and adventure that will make you laugh, cry and develop a newfound deference for these emblematic Western creatures.

With exquisite cinematography of breathtaking terrain from the Grand Canyon to Yellowstone, "Unbranded" takes us into this challenging endeavor, exploring the greater plight of the mustangs and the importance of public lands.

The "Meru" and "Unbranded" screenings are sponsored by BMO Harris Bank.

Tickets are $12, or $9 for Film Festival members. For tickets and more information, please call 928-282-1177. Both the theatre and film festival office are located at 2030 W. Hwy. 89A, in West Sedona. For more information, visit: www.SedonaFilmFestival.org.