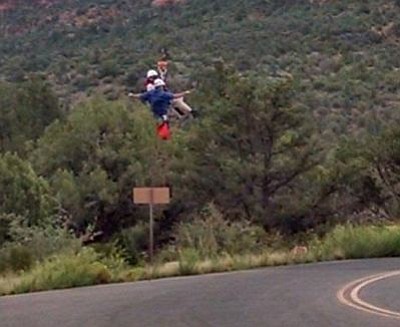 The Sept. 9 incident involved a man stuck on the north face of Bell Rock in Sedona.

Craig Slaunwhite, 34, from Canada, had called a family member, saying he couldn't find a safe way off a ledge on the rock, D'Evelyn said.

Just after 1 p.m., a DPS Ranger helicopter arrived and the crew decided to rappel two members of the Yavapai County Search and Rescue Team's Backcountry Unit onto a ledge above Slaunwhite, D'Evelyn said.

After they were in position, the rescuers rappelled down to him, rigged Slaunwhite's harness to a line on the helicopter, and it lifted him off the ledge.

On Sept. 7, two hikers on the north face of Granite Mountain, a 76-year-old man and

another in his 30s, had become lost on the way down after being out since the previous day and did not have supplies for a stay overnight, D'Evelyn said.

About 9:30 p.m., they called 911 and, using coordinates from their phone, the DPS helicopter was able to locate the pair, but couldn't land on the rough terrain in the dark.

They directed Backcountry Unit members to the two men, who managed to get to them by about 3 a.m., carrying clothing, food, and other supplies.

The morning of Sept. 8, the helicopter airlifted the two hikers and the rescuers to safety.