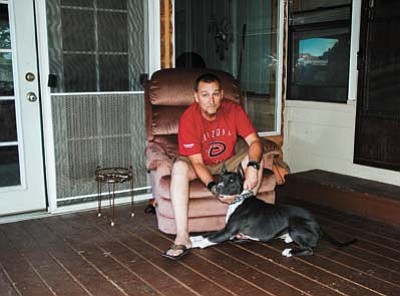 Arlene Hittle/PNI<br /><br /><!-- 1upcrlf2 -->William “Chip” Lake sits with his new service dog, Sharky, on the porch of his Chino Valley home. Lake served in the U.S. Army for 30 years, including deployments in the Gulf War and Afghanistan.

William "Chip" Lake's wife, Jean, said that the military was his first love: "I was second."

Second or not, the couple recently celebrated 30 years together - a milestone not many folks hit, Chip said with a pleased smile.

That's not his only 30th, though. Chip gave 30 years to the U.S. Army, serving overseas in the Gulf War and Afghanistan as well as completing numerous assignments at home.

"I always thought it was my true calling," Chip said of military service. He retired in January 2013 with the rank of sergeant first class and now lives in Chino Valley.

They met on Chip's first duty assignment, in the middle of the Utah desert. Jean's father, a civilian contractor, was in biochemistry and was the reason Chip switched from medic to chemical specialist.

He was reclassified as a chemical specialist in 1988, and served in a chemical decontamination unit out of Fort Ord, California, in Operations Desert Shield and Desert Storm, from October 1990 to April 1991. Among his duties: to determine how far a chemical weapon would spread and when it would hit, and to conduct smoke operations, laying out a smoke field "so our troops could maneuver."

Chip, who was born and raised in Phoenix and spent his teens in Prescott, joined the Army at 17 after having dinner with a recruiter. He was attending Bradshaw Mountain High School at the time and dropped out to join. (He later completed his education.) His mother, Claudia Duval, asked him, "Are you sure you want to do this?"

"I said yes, and I stuck with it," he said. His father was a Marine who served in Korea; other family members served in the Navy and Army. "When I was 18, it was a new adventure."

That adventure took him to duty assignments in Utah (where he met Jean), California, Alabama and Texas. For 2½ years, while Chip served in the Gulf War and in Germany afterward, Jean lived with her parents in Lincoln, Montana, where the Unabomber was found. She worked as a cashier and cook and took care of their children, Jean-Marie and C.J. (Daughter Baylee came after the war.)

Desert Storm had the distinction of being the first televised war.

"Everybody was glued to the TV," Chip said.

Jean and his mother both watched CNN's constant reports from the front. He, on the other hand, listened to daily briefings on the radio, via the Armed Forces Network.

The Gulf War was fast: "It was in and it was out," he said. His unit sat on the border waiting to move "and when we did, it was over quickly."

"I always thought we'd be back in Iraq," he said, adding that it did happen - 12 years later.

When Chip returned after the Gulf War, he tried civilian life for a while. After a year and a half, he re-upped. While serving in the National Guard, he coached basketball at Southern Utah University, then at Snow Canyon High School in St. George and Orem High School in Orem, Utah.

In 2006, Chip was teaching health at Chino Valley High School and coaching the freshman boys basketball team. He also was in the Arizona National Guard, with a transportation unit out of Bellemont. He'd been chosen to coach an Arizona high school boys' basketball team in Australia when he received the call from the National Guard that he'd been assigned to Afghanistan.

"I went where I thought I had a purpose," he said.

As a soldier over the age of 40, he thought he had something to prove, he added.

He served in Afghanistan from March 2007 to April 2008. He was part of the 158th Infantry Battalion out of Phoenix, the largest battalion to leave Arizona since World War II, he said. They ran security in support of the 82nd Airborne.

Oldest daughter Jean-Marie's husband left for Iraq at about the same time Chip went to Afghanistan, while she was pregnant with the Lakes' first grandchild. They now have six biological grandchildren - four born at Fort Stewart, Georgia.

He joined Operation Warrior Trainer, training National Guard and Reserve troops to go to Iraq and Afghanistan. He did that from 2009 to 2011, traveling all over from his home base in Fort Stewart.

"He absolutely loved it," Jean said.

The years of service took a toll on his health, however. He suffers from Gulf War syndrome, a multi-symptom disorder affecting many veterans of the Gulf War. Among the symptoms are chronic fatigue, muscle pain and cognitive problems. He believes it was caused by exposure to oil fires and chemicals.

When Chip returned from Afghanistan wounded, he was assigned to the Warrior Transition Unit, designed to return soldiers to duty fitness or medically retire them. He got medically retired and is classified as 90 percent disabled by Veterans Affairs.

He cannot work, though he can volunteer. In addition to Gulf War syndrome, he suffers from PTSD and traumatic brain injury. He's in constant pain.

"You never know what the day is going to bring," Jean said.

The family's newest addition, Sharky, should help Chip through the worst days.

Sharky, a service dog, can help him stand and open doors.

"If he falls, the dog helps him back up," Jean said.