Cooking up a good deal for Territorial Days 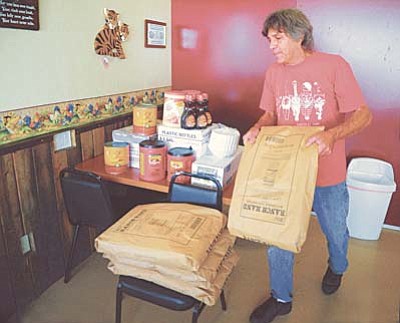 If you offer up a good deal, you better be prepared for the consequences. Members of Chino Valley's Lions Club learned that last year during the pancake breakfast for Territorial Days.

"We ran out of pancake mix last year", said Robert Arnold, who is preparing to run the breakfast for the first time. Last year he helped in the kitchen, mixing pancake batter.

"I even went home and got my pancake mix," said Bud Hanen, who was in charge of the breakfast last year. "We had a fireman volunteer in the kitchen, and he raided all the firehouses around here looking for more pancake mix."

About 500 people showed up last year for the pancake breakfast, which offers all-you-can-eat pancakes, ham, peaches, coffee and orange juice for $5. Last year organizers made about 1,200 pancakes and cooked up 400 pounds of ham.

"We're prepared this year," Arnold said. "This year I'm going to buy about four bags too many."

Territorial Days is Saturday, Sept. 5, and features a parade and vendors in Memory Park in addition to the pancake breakfast, which starts serving at 6 a.m. at the Senior Center, 1021 W. Butterfield Road. There is also a 10K and two-mile fun run on Saturday.

This is the 29th Territorial Days, which pays tribute to Chino Valley's role in Arizona history. The town of Chino Valley ran the parade for most of those 29 years, but stopped four years ago because of town finances.

The Lions, who have always done the pancake breakfast, stepped in to keep the event going. It is one of the two major fundraisers for the civic organization, which donates money to worthy causes in the town, said Lee Dudley, who is in charge of the parade this year. The other is the sale of Christmas trees.

"The Senior Center helps us out a lot," Hanen said. "They even cut the ham for us."

In addition to providing a place to serve the breakfast, the Senior Center also provides all the dishes and, most importantly, the kitchen.

The only way the Lions are able to offer such a great deal is because most of the food and the prizes in the raffle are donated. Companies donating this year include Sam's Club, Costco, AmeriGas, Ace Hardware, Tim's Auto Group, Singletree Cattle Company, Sedona Segway Tours and Bearizona Wildlife Park.

Arnold said they think they're ready to handle a lot of hungry folks on Saturday.

"I'm going to overstock this year," Arnold said. "Last year we were scrambling; this year we should be ready."