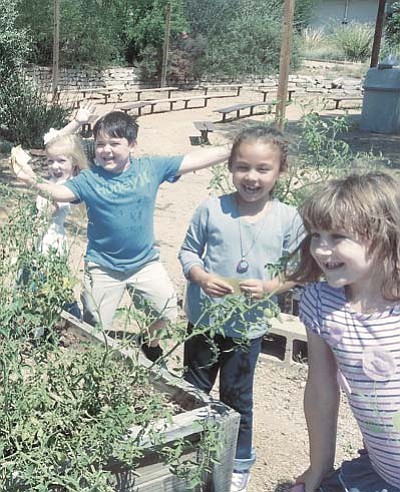 Students learn where their food comes from by growing their own Coyote Springs Elementary School. They harvest the garden to make dishes such as salsa and pesto. (Student Habitat Garden)

What happens in Brent Welsh's classroom, stays in the classroom.

That's because the curriculum includes soil, bugs, vegetables and plenty of sunshine.

The Habitat Garden at Coyote Springs Elementary School allows third through sixth grades the chance to gain knowledge about organic growing techniques. These students also act as tour guides for the kindergarten, first and second graders as the younger students also learn from the garden.

"Some of the students are starting to eat more vegetables and fruits because of what they are learning in the class," said Welsh, who teaches the Gifted and Talented Program at CSES.

He explained that the Habitat fills a little more than an acre, situated at the back of the school overlooking the Prescott Valley grasslands.

The Berkeley Tie Dye variety seems to be the classroom favorite.

"I try to make it cool so they like them," Welsh said regarding the heirloom and other tomato types.

The squash beetles did extensive damage to the pumpkin patch and squash, but the students did their research and discovered that Neem oil helps repel the voracious insects without harming the plants.

Also, the class erected a moveable goat pen and this semester, goats will help eradicate the grasses and weeds growing within the Habitat, Welsh said.

"We teach about pollination," he said, in addition to studying the butterfly migration, hummingbirds and bees.

"We harvested them and (students) had to come up with recipes. They made tomato basil pizza, tomato Texas toast and tomato soup," he said.

This year, Welsh will implement a cooking program based on slow foods, which is the opposite of fast food.

Already, the students have learned about the five sensory components of taste: sour, sweet, salty, bitter and savory.

"They identify the tastes on a worksheet...and learn to blend foods to a particular taste," Welsh said.

In the coming weeks, the students will make salad dressings, pesto sauces and salsas.

Some of the participating students agree that the Habitat is more than an outdoor classroom.

"When I'm in the Habitat, it feels like I'm in my own world, that I can do my own things," said sixth-grader Aidan Lauer.

One of the challenges to maintaining the Habitat includes raking the leaves and keeping the weeds from overgrowing, explained sixth-grader Kaleb Hill.