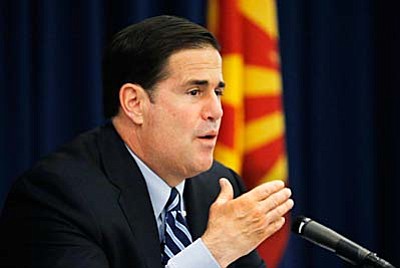 In this photo made on Wednesday, Oct. 21, 2015, Arizona Gov. Doug Ducey addresses the Arizona Commerce Authority prior to meeting with reporters to explain that his plan to use state land trust cash to boost school funding is changing as his office engages in talks with lawmakers and educators. The Arizona Senate has begun debate Friday on a package of bills that will pump $3.5 billion into K-12 education over 10 years and settle a five-year-old lawsuit filed by schools. (AP Photo/Ross D. Franklin)

The vote came after the House approved a plan late Thursday to pump an additional $3.5 billion into the K-12 education system over 10 years.

The plan now goes to Republican Gov. Doug Ducey, who has promised to sign it quickly after his staff helped negotiate it.

"With this permanent infusion of dollars into our schools that schools can spend as they see fit on their needs, educators will finally have the resources they have been asking for, and our students will have greater opportunities to succeed," Ducey said in a statement released after the Senate vote.

Voters will have final approval in a May 17 special election.

"It's $3.5 billion going to education," Republican Senate President Andy Biggs told members. "Even if it takes six (or) seven months, isn't it a victor? Savor a victory when you get it."

Democratic efforts to amend the bills in the Senate and House, including removing language that will cap future school spending and changing how the plan was funded, were rejected by majority Republicans.

The terms of the deal would close out a lawsuit filed by schools after lawmakers stopped making required annual school inflation adjustments during the height of the Great Recession in 2009.

In addition to failing to give the inflation adjustments, Arizona made many other severe cuts that left schools and parents reeling.

According to a 2014 study by the Center for Budget and Policy Priorities, Arizona per-pupil spending fell more than 47 other states since 2008 and funding remains 17 percent below pre-recession levels.

Ducey's first-year budget left K-12 funding flat but increased pressure on Republicans who control the state's government to do something.

Ducey proposed a plan to boost funding in June, to be enacted next year, but mounting pressure and the need to settle the inflation funding lawsuit forced his hand.

Ducey called lawmakers into a special session on Wednesday.

The deal will increase withdrawals from the state's $5 billion permanent land trust from 2.5 percent a year to nearly 7 percent. Democrats warned that puts the fund principal at risk.

The land trust component that was proposed by Ducey in June as a separate way to get new money to schools became a key funding source for the settlement, providing 60 percent of the cash. The remaining $1.4 billion comes from the state general fund.