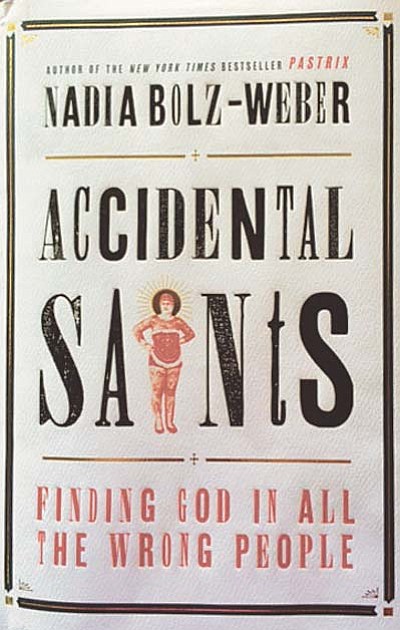 Rev. Nadia Bolz-Weber, author of Pastrix (Jericho, 2013) and Accidental Saints: Finding God in All the Wrong People, (Convergent, 2015) and Anne Lamott, author of Travelling Mercies (Pantheon Books, 1999) and many other books about her spiritual journey, have much in common.

Both are recovering alcoholics who write with painful honesty about their struggles; both are irreverent and funny; both are offbeat and yet devout Christians who came to their faith later in life.

Bolz-Weber is an ordained Lutheran minister with a church in Denver called House for All Sinners and Saints and Lamott is a popular and respected writer and speaker, but they are more similar than dissimilar.

Besides disliking fundamentalist judgmental churches that exclude outcasts, even while pretending to welcome them, and taking the sides of those who suffer from that exclusion, both women remarkably profess the same surprising revelation: they were pursued by Jesus and by God.

They did not pursue God; he or she ran after them and would not let go. Bolz-Weber, known not only for her arm-covering tattoos, but also for her graphic language, in person and in writing, states, "Jesus ran my a...down." Lamott likens Jesus to a little fox who relentlessly shadowed her and cornered her in her houseboat where she wasted so many hours drunk and drugged. She was pulled into recovery by a loving church in Berkeley, and in that family got help raising her son and making good life decisions.

She also chose to break away from rules she grew up with on how to look, how to be perfect, how to live. She grew her hair out in dreds and opened herself up to connections with the outsiders, the down and outs, the "rejects," and there found the real meaning of Jesus' ministry.

Bolz-Weber's second book on Accidental Saints is a series of provocative short essays on the ways she has learned humility and the meaning of forgiveness from the "sinners and saints" she pastors at the small church she started in Denver.

The titles of her essays illustrate her style, for example, "Absolution for A....holes." The last lines of this piece are: "Never once did Jesus scan the room for the best example of holy living and send that person out to tell others about him. He always sent stumblers and sinners. I find that comforting."

The second essay called "Whale Spit in the Superdome," (a riff on Jonah) dwells on her terror about speaking to "thirty-five thousand teenagers and adults at (the Lutheran) 2012 National Youth Gathering in New Orleans." She tries to get out of this invitation, saying she does not have "a heart for youth," but they persist, and wracked by fear and insecurity, she gets on the flight. Seated next to her is a teenage girl with pink hair and thin silvery scars on her arms from self-cutting. Bolz-Weber's arms are covered with tattoos that depict pictures of biblical stories. The girl is astounded that this strange woman is a pastor who is actually going to speak at the same conference. When they land, they hug and the girl gives Bolz-Weber a Manga drawing of herself.

The equally moved pastor reflects: "Sometimes I'm so thick God has no choice but to be almost embarrassingly obtuse. Like sending me a hurting kid with glistening lines on her arm-a kid with protective pink bangs, a kid who doesn't fit, a kid who in her own way said to me, 'Oh hey, God told me to tell you something: Get over yourself.'"

Bolz-Weber writes honestly about what she has learned from her parishioners, and in one essay, she relates how she learned about forgiveness from her intern Alex, a "young gay man with the spiritual gift of joy." Like many pastors who have a sermon planned that they toss out when tragedy hits, she threw hers out after the Sandy Hook Elementary School massacre. She suggests to Alex that during the prayers of the people, they read the names of the twenty-six teachers and children who died, and their ages, then ring a bell after each.

Alex replied, "You mean twenty-seven?....Adam Lanza. The shooter. He died too." Bolz-Weber painfully admitted Alex was right, and just before the bell rang for Lanza, she said to those gathered, "And in obedience to your command to love the enemy and pray for those who persecute us....Adam Lanza."

Bolz-Weber and Lamott take seriously and literally Jesus' message that the last shall be first and the first shall be last, the former in her preaching and hands-on work with the community, and Lamott with her writings. Bolz-Weber stresses God's forgiveness of our sins, for "our dirty feet," and God's unconditional love for us when we make bad decisions, not just after we manage to make better ones. At the end of the essay "Dirty Feet," she states, "God loves us now....Sometimes the simple experience of knowing this, of knowing that our sin is not what defines us, can finally set us free."

In the same essay, she describes how the congregation sings "Take, O, Take Me As I Am," while "assembling bleach, tourniquets, and condoms into kits for outreach workers...to hand to IV drug users on the streets of Denver.

"This is not a quaint 'service project,'" she writes. "It is a radical statement that we believe in grace."

Pastor Bolz-Weber and Anne Lamott are passionate purveyors of Jesus' radical truth; and they demand that those who believe in total acceptance of the many sinners and a few saints listen up and follow.