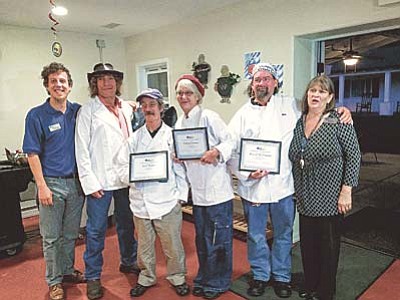 PRESCOTT - A showcase dinner is more than the food arranged on a plate.

It's preparation, creativity, timing and presentation.

It's nutritious bounty mixed with good company and pleasant conversation.

It's pride and polish. It's a thank you gift.

On the first Friday in October, the U.S. VETS Initiative's culinary program's showcase dinner was all that and more.

"This is better than what's served in some restaurants," said Louis Coutino, one of the 56 veterans who are part of the nonprofit organization's Veterans In Progress (VIP) transitional housing program.

Coutino and his fellow veterans were treated to the special dinner, along with staff and some community guests, with a menu of breaded pork chops with sautéed mushrooms, onions and gravy, fresh broccoli, mashed potatoes with chives, mixed salad and rolls. A fancy ice cream dessert topped off the meal that was the graduation exercise for four students who completed the latest 13-week course.

In February, U.S. VETS initiated the culinary program. The intent was to offer VIP residents a new job skills option. The 13-week curriculum was oriented on instruction in commercial culinary skills that might translate into jobs in the local restaurant market or food service industry.

Mid-course, however, the program was retooled so it focused less on turning veterans into chefs than on teaching health and life skills the veterans could apply wherever they land after departing the U.S. VETS family. Everything from time management and professional courtesy to proper food sanitation and the nutritional pyramid are all now part of the curriculum, officials explained.

Some students opted to pursue jobs in the food industry; others just want to know how to prepare food for themselves or their immediate families.

A Prescott College executive said she was impressed the program supervisors were flexible enough to hear from the veteran students on how to redesign the curriculum so it worked best for them.

"It's always good to be part of investigating solutions," Haley Hyatt said of the collaboration that enabled the veteran students and program supervisors to revamp the course so it appeals to more VIP residents.

She also was impressed with the caliber of their newfound culinary talents.

Indeed, the veteran residents and guests cleaned their plates; a few went back for more.

New VIP resident Gregory Chambers said it's not often he gets to eat a meal worthy of the finest dining establishment. "This place doesn't serve a bad meal," Chambers said of the dining room where some of the culinary students also work as part of the regular daily kitchen crew.

"If you walk out of here hungry, it's your own fault," Chambers said.

If anyone were to have walked into one of the culinary classes, AmeriCorp Vista program supervisor Will Heineke Jr. said, they would have witnessed "a lot of laughter." Heineke is a Prescott College graduate hired as part of a separate entity connected to Hyatt's nonprofit institute.

All of the graduates learned cooking techniques and healthy nutrition while building rapport with one another and the staff so that coming to class was welcomed rather than dreaded, Heineke said. He noted that the VIP kitchen recently received the highest rating for any of the 12 U.S. VETS sites across the nation.

Student Richard Roman, who with his new certificate will advance from dishwasher to cook at the local restaurant where he is now employed, said he learned valuable life lessons, and how to cook a fine meal. Before this course, the best thing he made for dinner was "reservations," Roman said.

Student Debra Owen was lauded by U.S. VETS officials for her determination to make "delicious meals" whether she was cooking for her fellow program residents or for a community crowd such as those who attended the recent Homeless Stand Down event.