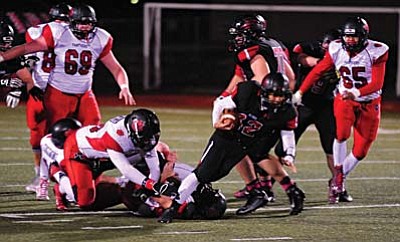 With the rivalry game against the Badgers looming Friday, Oct. 23, at Bill Shepard Field, the D-III No. 14 Bears took care of business behind senior tailback/defensive back Angel Gonzalez, who had a 99-yard kickoff return, an 11-yard TD run and a 56-yard TD pass.

"He's a kid with a lot of heart - physical, quick kid," Bradshaw coach David Moran said of Gonzalez, one of his co-captains. "He's going to play college football somewhere someday. He's just a good leader. And when we need the play to be made, he makes the play for you."

In other section action Friday, No. 17 Prescott was upset by No. 30 Flagstaff, 36-6, dropping the Badgers' league record to 1-1. Prescott is now a half-game behind Bradshaw for second place, while 2-0 Mingus stayed atop the heap. The Marauders took a brief break from section play this week to face McClintock in Tempe.

Versus Coconino, Bradshaw trailed 13-0 midway through the first quarter before bouncing back in a big way. Gonzalez lit an immediate spark for the Bears on his kickoff return with 6:06 left in the opening period.

"There was great blocking everywhere, and then smart of (our guys) not hitting people late once I passed them and let me do my thing," Gonzalez said of his runback. "But it wasn't just me. It was everyone involved. The team, the sideline, the crowd - they did it all."

Quarterback Gunner Bundrick followed Gonzalez's key special teams play with a 12-yard TD run and a 2-point conversion run with a minute left in the first quarter to hand Bradshaw the lead for good, up 14-13.

Leading only 28-20 at halftime, the Bears put the game on ice in the third quarter, however, outscoring Coconino 21-2 for a 49-22 advantage going into the fourth.

"Our kids came out and played hard, and played physical, and played fast," Moran said. "At halftime we just talked about playing our game, playing at our level. In the third quarter, we played at that level."

David Otero began the third with a 38-yard TD run on a triple reverse. The play began with Bundrick, who handed off the ball to Gonzalez, who then gave it to Derrik Fabela. Otero came back to the left side for the ball and sprinted to pay dirt.

Up 35-20 at that point, Bradshaw forced a turnover on Coco's next possession. Bears defensive lineman John Trout scooped up a fumble by Coco QB Cristo Tabares after the Bears' Dylan Wallace stripped Tabares in the backfield. Trout got the ball around the Coco 25 and ran in for a TD and a 42-20 Bradshaw lead with 10 minutes left in the third.

"My coach said, 'Get to the gap, rip through,' " Trout said of his play on the fumble. "All I remember is ripping through, seeing the ball and thinking 'palms up, pick it and run.' I though the whistle had blown. I stopped and then I kept going."

The Bears' Brevin Moser intercepted a pass on Coco's next possession, setting up Bradshaw's third and final TD of the quarter, a 13-yard pass from Bundrick to Brandon Comeno, who atoned for two earlier dropped balls.

Next Friday, Bradshaw's focus shifts entirely to Prescott. If the Bears don't beat their chief rival, they will be eliminated from section title contention. If Bradshaw wins, it would need Prescott to beat Mingus in Week 10 at home to have a shot at its third straight section crown.

Kickoff for the Bradshaw-Prescott game is scheduled for 7 p.m. Oct. 23.

"Right now we're looking at Prescott next week, and that's all we're concerned about," Moran added. "As far as the section championship goes, that's going to play out itself, and we've just got to take care of business on our end. You never know what's going to happen."