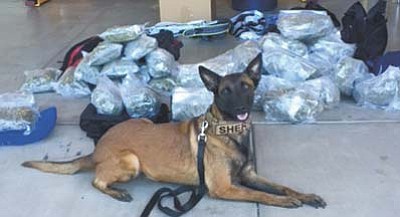 K9 Miley sits with the contraband marijuana found during a traffic stop on I-40 near Ash Fork Wednesday, Oct. 14. (Courtesy photos)

At approximately 7:15 a.m. Wednesday, Oct. 14, a YCSO K9 deputy stopped a black sedan for a traffic violation on I-40 East near Ash Fork, according to a press release from YCSO Media Coordinator Dwight D'Evelyn.

There were three men in the car. While discussing the traffic violation with the driver, a deputy smelled marijuana among several air fresheners in the vehicle's interior. The driver showed signs of nervousness and could not fully identify his passengers, D'Evelyn said, adding that the front seat passenger initially gave the deputy a false name. When his real name was determined, he was found to have a warrant out of Texas for possession of marijuana.

When the driver denied the deputy's request to check the vehicle for the source of the marijuana odor, the officer deployed his certified K9 partner for a sniff around the car's exterior. The K9 alerted on the trunk. Inside the trunk, deputies found five luggage bags all containing marijuana - a total weight of 39 pounds.

The passengers admitted knowledge of the drugs while the driver refused to answer questions. The trio was apparently heading from California to Texas to deliver the pot, D'Evelyn said.

The deputy noted the driver, accompanied by his 23-year-old girlfriend and their baby, was unusually nervous, D'Evelyn said. During the conversation, the deputy developed information indicating the likelihood that drugs were being transported in the vehicle.

The driver consented to a vehicle search. Just before the search began, an assisting deputy detected the odor of marijuana coming from the SUV's interior. During the search, a K9 deputy noticed loose plastic trim on the rear passenger side. When the trim was pulled away, a vacuum-sealed bag of marijuana was found. Additional searching revealed packaged marijuana in the spare tire space and behind trim at the rear of the vehicle, he said.

A more detailed search was completed at the YCSO evidence facility, with more pot found behind the driver's door and back door panels. In all, more than 20 pounds of marijuana was seized. The driver later admitted knowledge of the hidden marijuana but denied being involved in drug sales, D'Evelyn said.

Nava's girlfriend and baby were released.