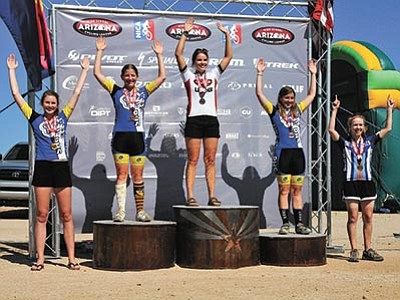 Traversing the 5.1-mile course on a 95-degree day, PHS was boosted by its Nos. 2, 3 and 4 junior varsity girls' cyclists, each of whom finished strong, coach Wayne Fernandez said.

"The race was brutal," Fernandez added. "It really took a toll on some of our top riders, but we pulled it out. Our JV girls pushed us."

Other local teams that placed included Chino Valley in sixth, Bradshaw in ninth, Canyon View in 24th and Tri-City Prep in 29th.

The 2015 season has two more races, including series race No. 4 at the SARA Park Rodeo Grounds Oct. 25 in Lake Havasu City, and Race No. 5 - the state championships at White Tank Regional Park Nov. 8 in Waddell.

"We're within striking distance of the top spot," Fernandez said of the state's overall team rankings. "If we can pull off a varsity win as a team (in one of the final two races), we have a chance (at a state title)."