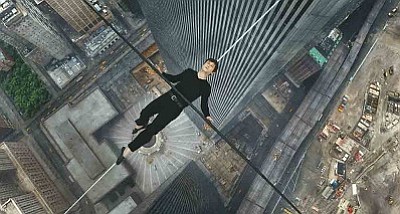 In this image released by Sony Pictures, Joseph Gordon-Levitt portrays Philippe Petite in a scene from, "The Walk." The film, about high-wire artist Phillippe Petit’s cabled walk between the Twin Towers in 1974, opened the 53rd New York Film Festival on Saturday, Sept. 26, 2015. (Sony Pictures via AP)

(NEW) - PAN - The story of an orphan who is spirited away to the magical Neverland. There, he finds both fun and dangers, and ultimately discovers his destiny -- to become the hero who will be forever known as Peter Pan. Cast: Levi Miller, Amanda Seyfried, Hugh Jackman, Garrett Hedlund, Rooney Mara, Cara Delevingne. Rated PG for fantasy action violence, language and some thematic material. Action/Adventure/Science Fiction/Fantasy

SICARIO - In the lawless border area, stretching between the U.S. and Mexico, an idealistic FBI agent is enlisted by an elite government task force official to aid in the escalating war against drugs. Led by an enigmatic consultant with a questionable past, the team sets out on a clandestine journey forcing Kate to question everything that she believes in order to survive. Cast: Emily Blunt, Josh Brolin, Jeffrey Donovan, Jon Bernthal, Benicio Del Toro, Maximiliano Hernandez. Rated R. Drama/Action/Adventure.

THE MARTIAN - During a manned mission to Mars, Astronaut Mark Watney is presumed dead after a fierce storm and left behind by his crew. But Watney has survived and finds himself stranded and alone on the hostile planet. With only meager supplies, he must draw upon his ingenuity, wit and spirit to subsist and find a way to signal to Earth that he is alive. Millions of miles away, NASA and a team of international scientists work tirelessly to bring "the Martian" home, while his crewmates concurrently plot a daring, if not impossible rescue mission. As these stories of incredible bravery unfold, the world comes together to root for Watney's safe return. Cast: Matt Damon, Kristen Wiig, Michael Pena, Jessica Chastain, Jeff Daniels, Kate Mara. Rated PG-13 for some strong language, injury images and brief nudity. Science Fiction/Fantasy.

THE GREEN INFERNO - A group of student activists travels to the Amazon to save the rain forest and soon discover that they are not alone, and that no good deed goes unpunished. Cast: Ariel Levy, Lorenza Izzo, Sky Ferreira, Kirby Bliss Blanton, Nicolás Martinez, Daryl Sabara. Rated R for aberrant violence and torture, grisly disturbing images, brief graphic nudity, sexual content, language and some drug use. Mystery/Suspense/Horror.

MAZE RUNNER: THE SCORCH TRIALS - In this next chapter of the epic "Maze Runner" saga, Thomas and his fellow Gladers face their greatest challenge yet: searching for clues about the mysterious and powerful organization known as WCKD. Their journey takes them to the Scorch, a desolate landscape filled with unimaginable obstacles. Teaming up with resistance fighters, the Gladers take on WCKD's vastly superior forces and uncover its shocking plans for them all. Cast: Dylan O'Brien, Kaya Scodelario, Ki Hong Lee, Thomas Brodie Sangster, Aidan Gillen, Giancarlo Esposito. Rated PG13 for extended sequences of violence and action, some thematic elements, substance use and language. Action/Adventure.

THE VISIT - The terrifying story of a brother and sister who are sent to their grandparents' remote Pennsylvania farm for a weeklong trip. Once the children discover that the elderly couple is involved in something deeply disturbing, they see their chances of getting back home are growing smaller every day. Cast: Kathryn Hahn, Peter McRobbie, Olivia DeJonge, Deanna Dunagan, Ed Oxenbould, Benjamin Kanes. Rated PG-13 for disturbing thematic material including terror, violence and some nudity and for brief language. Mystery/Suspense/Horror.

90 MINUTES IN HEAVEN - Don Piper died Jan. 18, 1989, when a semi-tractor truck crushed his car. Declared dead by the first rescue workers to arrive on the scene, Don's body lay under a tarp for the next 90 minutes. Don's soul, meanwhile, was experiencing love, joy and life like he'd never known before. Don was in Heaven. When another pastor's prayers helped bring Don back to life, he became a living miracle! Yet this is one miracle Don wished never happened. Heaven's bliss was replaced by excruciating pain and emotional turmoil. With the support and prayers of his beloved Eva, their three kids and friends near and far, Don clings to his faith in God and fights to regain a semblance of his previous life. The Piper family's incredible true story of perseverance and overcoming the challenges of life-and death-will bring hope and encouragement to all who see it. Cast: Hayden Christensen, Dwight Yoakam, Bobby Batson, Kate Bosworth, Hudson Meek, Elizabeth Hunter. Rated PG-13 for intense accident and injury images. Drama.

A WALK IN THE WOODS - In this new comedy adventure, celebrated travel writer, Bill Bryson, instead of retiring to enjoy his loving and beautiful wife and large and happy family, challenges himself to hike the Appalachian Trail - 2,200 miles of America's most unspoiled, spectacular and rugged countryside from Georgia to Maine. The peace and tranquility he hopes to find, though, is anything but, once he agrees to being accompanied by the only person he can find willing to join him on the trek - his long lost and former friend Katz, a down-on-his-luck serial philanderer who, after a lifetime of relying on his charm and wits to keep one step ahead of the law - sees the trip as a way to sneak out of paying some debts and sneak into one last adventure before its too late. The trouble is, the two have a completely different definition of the word, "adventure." Now they're about to find out that when you push yourself to the edge, the real fun begins. Cast: Robert Redford, Kristen Schaal, Nick Offerman, Emma Thompson, Mary Steenburgen, Nick Nolte. Rated R for language and some sexual references. Drama/Action and Adventure/Comedy.

WAR ROOM - Tony and Elizabeth Jordan have it all-great jobs, a beautiful daughter, and their dream house. But appearances can be deceiving. Tony and Elizabeth Jordan's world is actually crumbling under the strain of a failing marriage. While Tony basks in his professional success and flirts with temptation, Elizabeth resigns herself to increasing bitterness. But their lives take an unexpected turn when Elizabeth meets her newest client, Miss Clara, and is challenged to establish a "war room" and a battle plan of prayer for her family. As Elizabeth tries to fight for her family, Tony's hidden struggles come to light. Tony must decide if he will make amends to his family and prove Miss Clara's wisdom that victories don't come by accident. Cast: Priscilla Shirer, Karen Abercrombie, T.C. Stallings, Alex Kendrick. Rated PG for thematic elements throughout. Drama.

*Visit PrescottKudos.com for the full listing.