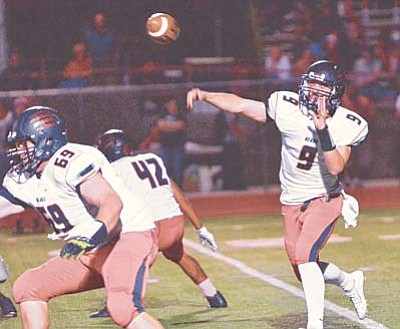 Courtesy of BMSH<br /><br /><!-- 1upcrlf2 -->Bradshaw Mountain quarterback Gunner Bundrick came up just short in leading a last-second comeback for the Bears’ in their section opener at Mingus Union.

With the loss, the Bears' four-game winning streak ended, as Bradshaw slipped to 4-2 overall and 0-1 in section play.

For No. 22 Mingus it was an important victory, pushing the Marauders to 5-1 overall, 1-0 in section.

In a hard-hitting game at Bright Field, Bradshaw never led. The Bears had the ball at the Mingus 36-yard line with four seconds left in regulation on fourth down, trailing 20-15. But Mingus' pressure defense foiled a lateral from quarterback Gunner Bundrick and the Marauders held on as time expired.

Bradshaw trailed only 7-3 at halftime. But in the third quarter, Mingus resorted to its ground game and capitalized on Bradshaw penalties and a turnover.

The Marauders outscored the Bears 10-6 in the third. Mingus kicker Trey Meyer booted a 30-yard field goal for a 10-3 lead with 7:55 left.

Bradshaw turned the ball over on the first possession of second half on the snap, and Mingus got the ball at the Bears' 39. Three BMHS penalties pushed the Marauders into the red zone.

Bradshaw would bounce back, though. Bundrick threw a 75-yard TD pass in the flat to Brandon Comeno thanks to a nice block by Daniel Otero. But the extra point failed and Mingus led 17-9 at the end of the third.

To start the fourth quarter, Bradshaw was forced to punt on its opening possession.

Mingus then began to eat the clock on the legs of Phyfer, who converted two big third downs. Although the Marauders didn't score a TD, Meyer drilled a 30-yard FG with 5:27 left for a 20-9 Mingus edge.

The Bears would score again, though, on the strength of Bundrick's arm and two fourth down conversions. On 4th and 5 from the Mingus 21, Bundrick threw a TD pass to David Otero with 3:08 left, but the 2-point conversion failed.

Leading 20-15, Mingus again resorted to its ground game to chew up clock, forcing Bradshaw to use all three of its timeouts. On 3rd and 12 and 2:15 left, Bradshaw took its final timeout and its defense then forced Mingus to punt.

On its final drive, Bradshaw started at its own 37. The Bears would convert on fourth down with a first-down pass to David Otero at the Mingus 36 with 21 seconds left.

Moments later, with 16 seconds to go, Bundrick spotted Daniel Otero wide open, but tossed an underthrown pass under pressure. Then, with 4 seconds left at the Mingus 36, Bundrick was pressured, reversed field and lateraled the ball before the whistle was blown to end the game.

On the injury front for the Bears, middle linebacker/starting left tackle Drue Scully hurt his knee early in the first quarter and had to be taken off the field on Mingus' opening possession. His status wasn't immediately known at press time.

It was learned this week that Bradshaw starting sophomore lineman Caleb Vogel is out for the rest of the season after being injured in a season-opening loss to Arcadia.

Next up, Bradshaw hosts Flagstaff High for its second section game at 7 p.m. Friday, Oct. 9, at Bob Pavlich Field in Prescott Valley.