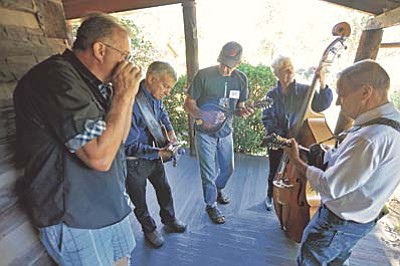 Matt Hinshaw/The aDaily Courier<br /><br /><!-- 1upcrlf2 -->A group of folk musicians gather on the porch of the Governors Mansion and jam Saturday morning during the 37th Annual Folk Music Festival at the Sharlot Hall Museum in downtown Prescott.

The sounds of folk music rang throughout the grounds of the Sharlot Hall Museum during the 37th Annual Folk Music Festival on Saturday Oct. 3. Arizona's oldest festival for the genre, there were four stages featuring duos, trios, quartets, folk bands and solo artists along with a few impromptu jam sessions and workshops.

For some, this was their first time coming to the festival. One first-timer was Janene Ferraris, a violin and fiddle player from Phoenix.

"I figured, listen if there's a bunch of people that want to play music, I'm in," she said.

A few performers have been coming for several years, like Bob Frank, a songwriter of humorous, western, cowboy, southern and love songs from California's Bay area. Having played guitar since the age of 13, the best part about coming to the festival is sharing the songs with the people, Frank said. He called it a good place to play and always enjoys coming back.

Frank writes his own songs, inspired, he says, from the mind and heart.

Another repeat was Steven Decker, who gave a workshop on acoustic guitar styles. From Flagstaff, Decker has played guitar for 55 years and coming to the festival for nearly 10 years. It's the people that keep bringing him back as well as foster the enjoyment of doing the workshops, he said.

"The people that come to these festivals are just the finest people in the world," Decker said. "Anything that I could do to connect with these people is a darn good way to spend a Saturday."

Also from Flagstaff was Savannah Chappus, who was sitting in on Decker's workshop.

Noting that folk is the genre of music that she likes to play the most, Chappus said it's the simplicity of the music she enjoys.

"The fact that it still sounds good and the fact that it's simple," she said. Most of the stuff I play, I don't realize it's folk, but I guess it is mostly folk."