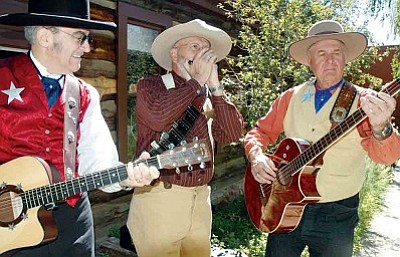 Banjos, guitars, washboards and more than 90 musical performers will be part of Sharlot Hall Museum's annual Folk Music Festival this weekend. Held from 10 a.m. to 5 p.m. Saturday, Oct. 3, and 10 a.m. until 4 p.m. Sunday, Oct. 4, at the museum, 415 W. Gurley St., the festival is in its 37th year. Cost is $8 per day for general admission, $6 for members, and free for children 15 and younger. This year the organizers are introducing a two-day pass available with online orders only (www.sharlot.org).

Museum Media and Marketing Manager Ken Leja said the event is the state's oldest folk music festival, and it has become more seasoned and intimate over the years. The mission is to inspire young people and those who haven't been introduced to folk music, Leja said, adding there will be opportunities to jam with the musicians on the grounds as well as see them on stage.

"It's much more than four stages," he said. "You see the smiles when they finish a song; it's a great thing to see and watch."

In fact it's that chance to jam with the musicians and talk one-on-one with them as they share their experiences that makes the Folk Music Festival different from similar festivals, Leja said.

The Hudson Family Band has five performing members, the youngest being 3 years old, who play between five and seven instruments, which they switch during the performance, Cindy Hudson said. The band started playing two years ago, she said.

"Playing together was part of the motivation of learning those songs," Cindy said. "It just makes it fun and there's an energy that goes along with it."

This is the first year the Hudson Family Band will perform at the Folk Music Festival, Cindy said, noting they got the idea from their music teacher.

In addition to jam sessions and the performances, the festival also has workshops covering a wide range of subjects conducted by the musicians. For those who see folk music as a hobby, this encourages the attendees to take their music to the next level, Leja said.

"Every year, the performers ... start sharing secrets they've learned. These are by people that do it day in and day out," Leja said. "It's a great opportunity for everyone to learn something and have a great time."