Kudos Kravings: From duck to poppers, Prescott's appetizers will tantalize 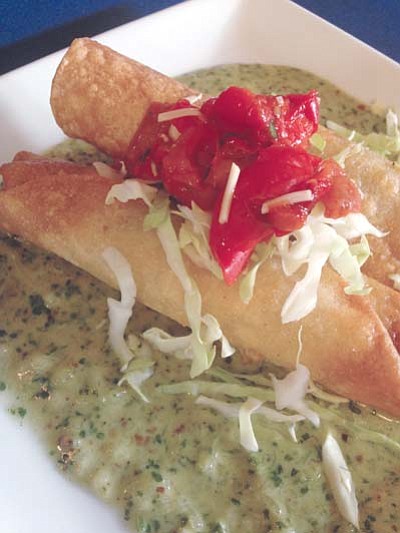 Prescott is teeming with eateries, from the bars on Whiskey Row to restaurants in Frontier Village. And where there's an entrée, there's bound to be an appetizer leading the meal.

Here are a few of them.

El Gato Azul, 316 W. Goodwin St., is home to many unique appetizers. El Gato has Duck Taquitos which are duck confit-filled tortillas with Anaheim and red chilies and a cilantro cream sauce.

For those with a pre-entrée craving for seafood, Hassayampa Inn's Peacock Room has that covered with Mussels Ahumado. That consists of one pound of black mussels sautéed in clarified butter and white wine, simmered in a smoky tomato coulis and served with baguette points and fresh cilantro for $13. Hassayampa Inn is at 112 E. Gurley St.

And for something a little less extravagant, Barley Hound's, 234 S. Cortez St., may be the place to go. Its most popular appetizer is its sweetbreads. Great for sharing, the dish comes with sweet and sour sauce, peanuts and garlic and is served with chopsticks, all for $12.

Who doesn't love a fried starter? Two Mamas' Gourmet Pizzeria has a brand new appetizer called the Appetizer Platter, which takes previously separate appetizers and puts them all onto one plate. It has batter fried mushrooms, zucchini, mozzarella sticks and jalapeno poppers for $9.99

But the restaurants with great appetizers aren't all in downtown Prescott. Take Augie's, 1721 Highway 69 in Frontier Village, for example. Augie's Restaurant has plenty of appetizers, one of which is the negimaki. It has eight pieces of cut and rolled striploin with carrots, scallions, asparagus and teriyaki sauce for $8.95.

Kudos Kravings: From duck to poppers, Prescott's appetizers will tantalize
Kudos Kravings: When an appetizer is all you need, try these
Foodie Review: El Gato Azul - off the beaten (plaza) path
Kudos Kravings: Start your meal simply or 'sophisticatedly'
Chew on This: Maya Mexican Restaurant celebrates 23 years