Cardinals vs. Bengals: 'It's not just another game' to Palmer 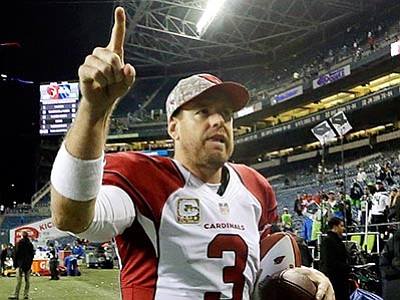 TEMPE - A little over four years ago, Carson Palmer was home, away from football without pay, in a bitter stalemate with Cincinnati Bengals owner Mike Brown.

Palmer wanted out, Brown insisted the quarterback honor his contract. After five weeks, Palmer finally got his wish, traded to the Oakland Raiders for first- and second-round draft picks.

This Sunday night, Palmer leads the prolific offense of the Arizona Cardinals (7-2) against the Bengals (9-1), a signature matchup of the NFC West and AFC North leaders. And Palmer didn't hide how much it will mean.

"Any time you play a team where you spent some time, especially for as much time as I spent there, " he said, "it's not just another game."

This isn't the first time Palmer has faced the Bengals. He did it the first year after he left, a 37-10 Raiders loss in Cincinnati. This one comes in front of the loud, friendly fans in Arizona.

The Brown vs Palmer backstory grew a bit this week when Brown told FoxSports.com that Palmer, as the two sat and argued, had told him that he was so "banged up" before he left Cincinnati he probably would play only a year or two. Four years later, Palmer is at the top of his game, ranking second behind Tom Brady in the NFL with 23 touchdown passes and a 108 passer rating.

Brown went on to say some nice things about the quarterback he drafted No. 1 overall out of Southern California in 2004.

"I like Carson Palmer personally," Brown told FoxSports.com. "I did when he was here. I regret it broke apart the way it did. I don't want him to beat us any more than he wants us to beat him. I'm sure that will be in the back of his mind. But other than that, I wish him well. He's a special passer, very accurate. I look at him play and I see the player that we had when he was here. When he's on and playing the way he can play, he is a big-time winning quarterback."

Palmer wasn't going to get into the details of that long-ago blowup with the Bengals owner.

"I'm not going to get into a 'he said, she said' situation with Mike Brown," Palmer said. "We obviously disagreed, and it ended in a very colorful, heated argument."

He has repeatedly said that he will speak publicly about it at some point. But Wednesday wasn't' that day.

Only a handful of current Bengals were teammates with Palmer.

"That was so long ago for all of us," Cincinnati left tackle Andrew Whitworth said. "But the truth is, he was a great football player and a great leader here and that's the way we look at it and we'll go forward and play football."

Palmer said his memories of playing for the Bengals are "very positive."

"A lot of great relationships, a lot of fun times," he said. "I'm a glass half-full type with the way I look at things and I think of all the positive things."

He made the playoffs twice with Cincinnati but never won a game. The first, on Jan. 8, 2006, was one of his worst days of playing football. Facing the Pittsburgh Steelers in the wild-card game, his first pass gained 66 yards and left Palmer writhing in pain. He tore an ACL and MCL. The offensive coordinator for the Steelers that day was current Cardinals coach Bruce Arians.

It was one of several times Palmer and Arians were on the same field as division rivals.

"He was tough as nails," Arians said, "and the more we hit him, the better he got."

Palmer and the Bengals made the playoffs again in the 2009 season, but lost the wild-card game to the New York Jets.

After two seasons in Oakland it was clear the Raiders wanted to go younger at quarterback. The Cardinals, with Arians recently hired, picked up Palmer for a seventh-round draft pick.

The 35-year-old quarterback, who is coming back from another torn ACL, has meshed brilliantly with the high-scoring offense of Arians and with the coach himself. Arizona is 20-4 in Palmer's last 24 starts, and the offense is ranked No. 1 in the NFL.

He won't worry about any lingering bad feelings the Bengals fans may harbor toward him.

"There are two sides of every story," Palmer said, "I know the truth and I know my side and obviously his side. You can't worry about other people's opinions."

Notes: Arians said LG Mike Iupati has passed his concussion protocol but still has a stiff neck and it's uncertain when he will resume practicing. Iupati was taken off the field in an ambulance during Arizona's 39-32 victory at Seattle on Sunday night. ... There was a long list of injured players who did not practice Wednesday: Iupati, WR John Brown (hamstring), CB Justin Bethel (illness), G Jonathan Cooper (knee), WR Michael Floyd (hamstring), OLB Markus Golden (ankle), DT Corey Redding (ankle).