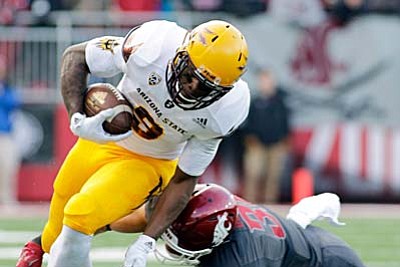 TEMPE, Ariz. - Arizona State had aspirations of a Pac-12 championship at the start of the season. The Washington Huskies began to wonder what might be possible after a solid start.

Now both teams are faced with the same dilemma: Win two of their final three games just to become bowl eligible.

It starts Saturday against each other.

The Sun Devils (4-5, 2-4 Pac-12) have been inconsistent all season despite being a trendy preseason pick for the College Football Playoff.

Arizona State has had trouble taking care of the ball and been plagued by inopportune penalties, both firsts in four seasons under Graham. The Sun Devils also have struggled at closing out close games, often making critical errors late in games to let it get away from them.

Arizona State closes out the season against Arizona and California in its bid for a fifth straight bowl game.

"You know, last year we won those games and this year we haven't," Graham said. "It doesn't matter why. You've got to flip that and turn that."

Washington (4-5, 2-4) has been solid defensively most of the season, allowing the Huskies to stay in games. A young offense that's been inconsistent has held them back.

The last two weeks have been a prime example: Washington racked up 49 points in a blowout win over Arizona, committed five turnovers in a loss to Utah, including a fumble that was returned for a touchdown.

Washington closes out its schedule against Oregon State and rival Washington State in its bid for a sixth straight bowl game.

"It's always important to try and get an extra game, no question," Huskies coach Chris Petersen said. "I think that's in the back of everybody's mind. I think everybody gets that, but I think it's just about us building some skill and taking care of some of the things that we've been discussing here."

A few more things to look for when the Huskies meet the Sun Devils on Saturday:

SUN DEVIL TURNOVERS: Arizona State has been one of the nation's best teams at taking care of the ball under Graham, ranking among the nation's best in each of his first three seasons. The Sun Devils have struggled in that area this season, ranking last in the Pac-12 with a minus-6 turnover margin. Arizona State has 17 turnovers overall with three of those coming in the red zone, where the Sun Devils are 11th with an 81.8 percent conversion rate. Limit the turnovers, the Sun Devils will have a chance against the Huskies.

DESERT WOES: Washington has not had much luck in the state of Arizona lately. The Huskies have lost 11 of their past 13 games in the desert, including to Oklahoma State in last season's Cactus Bowl. Washington has struggled against Arizona State no matter where they play, losing nine straight to the Sun Devils.

STICKING WITH BERCO: Mike Bercovici has had an up-and-down season after replacing Taylor Kelly as Arizona State's quarterback. The senior has thrown for 2,473 yards, 19 touchdowns and eight interceptions, and his quarterback efficiency rating of 128.0 is 11th in the Pac-12. While some fans have called for the Sun Devils to give some of the younger quarterbacks a chance to prepare them for next season - namely redshirt freshman Manny Wilkins - Graham is sticking by Bercovici, saying it never crossed his mind to switch.

NUMBERS: Arizona State's D.J. Foster broke the Pac-12 record by catching a pass in his 49th straight game last week against Washington State. USC's Kareem Kelly set the previous record. ... Washington has outscored opponents 111-28 in the third quarter this season. ... Arizona State's Jordan Simone leads the nation in solo tackles with 7.8 per game. ... The Huskies lead the Pac-12 in red zone defense, allowing 13 touchdowns in 32 trips inside their 20.