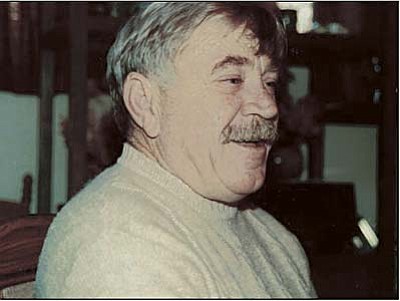 Angelo Manera Jr. passed away peacefully in his home in Prescott, Arizona on Nov. 5, 2015.

Angelo was born Oct. 8, 1934 in Clemenceau, Arizona (now Cottonwood) to Angelo Sr. and Antoinetta Manera. Angelo was preceded in death by his parents, Angelo Sr. and Antionetta; wife, Bonnie; a brother, Robert; a sister, Theresa; and step-mother, Louisa. He was extremely proud of his Italian heritage. Angelo lived the majority of his life in Yavapai County.

Angelo attended Prescott High School, graduating in 1953, where he established life-long friendships. He served in the United States Marine Corps in Korea from 1954 to 1956. Upon returning to the States, he attended his beloved Arizona State University where he earned a degree in Architectural Design. He graduated in 1960 and returned to Prescott to begin his career with Yavapai County. Angelo held several positions within Yavapai County, ultimately retiring as Public Works Director in 1991. After his retirement, he remained with Yavapai County as a Special Projects Consultant. During his career, he was a large part of several projects including the Camp Verde Jail, Yavapai County Administrative Buildings, Yavapai County Fairgrounds and Pioneer Park.

In 1964, Angelo married the love of his life, Bonnie Lee Lyford. Angelo and Bonnie had one son G.R. Angelo was very active in the community with the YMCA, Yavapai County Fair Association, Smoki, coaching youth sports, Cub Scout Leader as well as a role model for several young men and women in the community. He was known for an incredible work ethic, which he always attributed to Angelo Sr.

Angelo loved Yavapai County and one of his favorite past times was to take family and friends to the remote portions of the county for picnics and exploring. He loved to fish, hunt and camp in the woods, but most of all he loved to argue and debate with anyone.

Angelo is survived by his son, G.R. Manera (Jennifer); and his granddaughter, Alyssa. He was extremely proud of his family and life-long friendships. He will be missed.

In lieu of flowers, the family request donations to Catholic Charities, 434 W. Gurley St., Prescott, AZ 86301, in the name of Angelo Manera Jr.