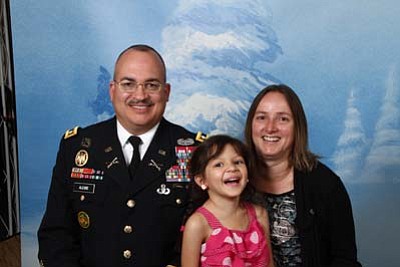 City of Residence: Just outside Prescott in Yavapai County

I am the son of a Veterans Affairs physician, Dr. Jose Alegre, and we lived in V.A. Center (old Fort Whipple) quarters from 1967 until we moved to a new house out on Williamson Valley Road in the 1970s, where I live today, having bought the house from them for my own family.

I graduated from Prescott High School and two of us from '77 went to service academies; Milt Stretton attended the Naval Academy and I went to West Point. My Army officer service started late in the Cold War, in infantry and smoke generator units in Colorado, Alaska, and the Chemical Corps School and Center in Alabama, where Melody Ashe, another officer, and I met and married there at the old Fort McClellan Women's Army Corps chapel.

The end of the Cold War was good news that bolstered our hopes for peace but also disrupted career expectations that many of us in the services had grown used to.  I switched specialties to psychological operations for a time, in the Army Special Operations Command at Fort Bragg, commanded an airborne unit, served as the plans officer for 10th Special Forces Group, and served with my troops or teams in Haiti, Bosnia, and Kosovo. We were posted to Washington, D.C., where I was trained in arms control inspections and diplomacy.  I was sent to Iraq as one of the last of the UNSCOM (U.N. Special Commission) inspectors and as an arms control diplomat at our embassies in Ukraine and Kazakhstan.

I was posted to Hawaii as a senior staff officer, and we meant it to be my last assignment before retirement, as I was tired from all the travel and deployments.  But, soon after I got used to my job and emptied my inbox, the attacks on 9/11 happened.  I later left this assignment to serve an Operation Enduring Freedom tour in Istanbul, Turkey.  This was risky then, as Al Qaeda cells were hunting us there, but there I made many Turkish and NATO friends.

I retired in 2004 and we had moved to the Prescott area by then, and I took a job as a Defense contractor in D.C.  But by 2006 the Army requested that I return to active duty and go to the Iraq War Surge on Generals Petraeus' and Odierno's staffs. This return to Army service continued for six years - Iraq for the Surge, Fort Bliss (El Paso, Texas) and Afghanistan for Air Defense service, Iraq again for the war's last year as a cavalryman and adviser to the Iraqi Army, and Fort Bliss for the final time to help test new equipment.  Urgent military personnel needs ended at that time and I returned to Prescott and retirement in 2012 after 30 years' total service.

These may total more than 60 in number, but I must say that every single one is a unit award, and none solely mine, just mine to wear to represent truly great other people - gallant soldier, sailor, airman, Marine, Coast Guardsman and Public Health Service veterans whom I think about all the time while I enjoy retirement in my Prescott-area home. They are as I am - we will return to armed service yet again if you need us.