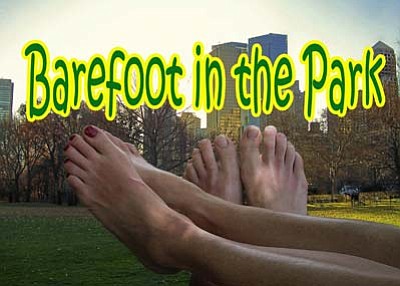 A little more physical than the average production of "Barefoot in the Park," it presents the question of love for two couples in different stages of life.

A self-proclaimed Neil Simon fan, Meyer said that "Barefoot in the Park" is an all-time favorite, noting it was his first theatrical job outside of college.

"Working on it now, 35 years later, it's amazing how it just absolutely holds up," Meyer said. "There's so many plays after that amount of time that become dated, become stale, but this is just as fresh as anything being written today."

The production is also different from others, Meyer said. Some farce and slapstick are mixed in, making the show more physical than it usually is.

Meyer spoke highly about the cast, noting that half the job of directing is done if the show is cast well. "Barefoot in the Park" has two actors new to the PCA, though they've been on other stages before, Meyer said. The new performers are Plaso, playing Corie Bratter and Hall, playing the delivery man. This cast is also one of the smaller casts that Meyer has worked with in quite some time, he said, adding that it's nice to be directing a small cast again.

"Barefoot in the Park" is one of those shows where the audience can park half their brain at the door and enjoy it, Meyer said. But there is some thinking involved, too, as it addresses the question of love between people of two different ages, he said. It involves young newlyweds as well as an older couple, both portrayed positively.

Meyer said he believes people will identify with it quite a bit.

"Most of our patrons have ... had probably two marriages or more so they'll recognize that part of it. A lot of them also have children, so they'll recognize wanting the best for our children, wanting them to be happy, wanting to keep them from making the mistakes we've made," he said. "And if some younger people come, they'll see that love is not so easy. It's easy to be with someone for a short while, but when you start thinking about the long haul, that's a whole different ball game."

For more information or to buy tickets, visit www.pc-az.com.