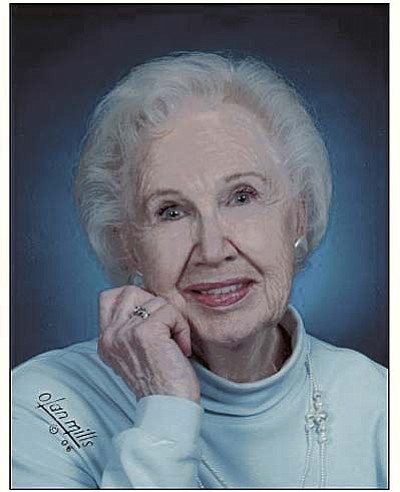 Carol Roberta Eaton, 92, was born on Jan. 7, 1923, in Gothenburg, Nebraska, to Earl and Roberta Stevenson. She passed away on Oct. 23, 2015, at Sierra Winds Life Care in Peoria, Arizona and is now peacefully with her Lord.

Previously she had been a long time resident of Phoenix and Prescott, Arizona. She graduated as Valedictorian of her high school class in Gothenburg and also Columbia College of Missouri, where she pursued musical studies. Carol arrived in Phoenix in 1953 after her husband, Cliff, was discharged from the Navy as a lieutenant commander and had graduated from the University of Nebraska with an architectural degree. After raising four children, she received a Bachelor in Education from ASU. Carol taught first and second grades along with home economics in inner city schools and also worked at the Phoenix Crisis Nursery for 10 years before retiring in Prescott, Arizona. Carol was an active member of the United Methodist Church in every community she lived. She was a soloist, sang in numerous choirs, and participated in many church musical productions and was active with the United Methodist Women. She was an active member of P.E.O. for 74 years with a life-long passion to help educate women. Her other interests included reading, sewing, cooking, music, volunteering, a gift of hospitality, and her family.

A celebration of Carol's life will be at 1 p.m. on Saturday, Nov. 14, 2015, at the Willowbrook United Methodist Church, 19390 N. 99th Ave., Sun City, Arizona. A private burial service will be at Green Acres Cemetery in Scottsdale, Arizona.

Memorial donations may be made to Willowbrook Methodist