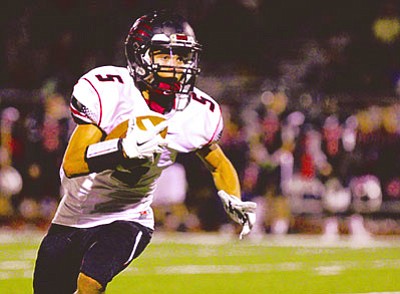 Bradshaw Mountain running back Derrik Fabela runs down the right side during the second quarter of Friday night’s 37-34 win over Maricopa. Fabela had a 2-yard touchdown run with 1:46 to play before halftime. (William Lange/InMaricopa.com)

With 5 seconds remaining in the game, quarterback Gunner Bundrick found wideout Ryan Shaver in the corner of the end zone on an 18-yard touchdown pass and the 16th-ranked Bears stunned Maricopa 37-34 on Friday night.

"Gunner is a play maker and in clutch situations, he wants the ball in his hands," Bradshaw Mountain coach David Moran said. "I'm totally confident in him and his abilities. There was a play to be made and he made it."

The victory puts Bradshaw Mountain into the AIA Division III state tournament. The Bears face the team they opened the season against, Arcadia. They'll look to improve on that result, which was a 35-14 loss.

Both teams would score 22 points in the final 1:21 and the Hallows-eve shocker may have more than likely solidified No. 16 Bradshaw Mountain's bid for the Division III state football playoffs.

With nothing to lose, Moran called for a two-point conversation that led to an Angel Gonzalez score and Bradshaw Mountain led 29-28 with 1:12 to play.

"The coaches and I discussed it prior to scoring the touchdown and the kids wanted to go for two, so we did," Moran said.

With 26 seconds to play in the game, however, Maricopa quarterback Aaron Owens launched a prayer and wideout Isaiah Pedro answered it with a 42-yard touchdown catch to give the lead right back to the Rams, 34-29.

"Hats off to Maricopa. They had the best athletes we've seen all season," Moran said.

Maricopa [7-3 Overall] accidently kicked the ball out-of-bounds on the ensuing kickoff, giving Bundrick and the Bears good field position and one timeout to make things happen.

After a 17-yard completion, and a 15-yard personal foul penalty against the Rams, Bradshaw Mountain had the ball 1st-and-10 from Maricopa's own 18-yardline with 10 seconds to play.

With the win, Bradshaw Mountain wraps up the 2015 regular season with a 7-3 record. It is the third straight year the Bears have won as many games.The Bears were two-time defending Section VIII champions until No. 11 Mingus took care of business against the Prescott Badgers on Friday night in a 27-7 win.

With that loss, the Prescott Badgers [7-3 Overall] are eliminated from postseason contention. And with cross-town rival Prescott, which beat the Bears last week 30-13, having a chance to win the Section VIII title outright and failing, Bradshaw Mountain earned an at-large bid to make the Division III state playoffs.