New life for mine? - Tuff mine in Skull Valley explores options to restart operations 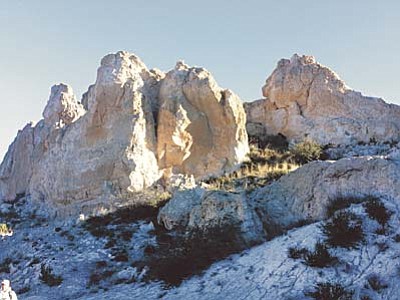 KMC/photo<br>Skull Valley mine operators are looking into the possibility of restarting operations.

SKULL VALLEY - Some Skull Valley residents are concerned about air and water quality should the Kirkland Mining Company (KMC) decide to resume operations. Others who worked at the mine in the 1980s say there is no hazard.

And KMC President Areta Zouvas, who did not attend the Oct. 21 meeting at the Skull Valley Community Center, feels that the mining industry is so highly regulated, companies have to follow extensive rules and guidelines pertaining to health and safety in order to stay in operation.

About 90 residents attended the meeting along with Yavapai County District 1 Supervisor Rowle Simmons and Steven Mauk, county director of development services, who had to remind the audience several times to keep the discussion civil.

Resident Helen Harrington fears air contamination from hazardous dust particles such as erionite, a known carcinogen. Zouvas said earlier this week by phone that no tests had identified erionite at the mine site. She hired the geotechnical and environmental sciences consultants Ninyo & Moore to take 18 samples throughout the mine and sent them for testing.

"They said this is a non-fibrous mineral. Period. It's not erionite. It's not asbestos," Zouvas said.

The 320-acre tuff mine, located on Bureau of Land Management property, closed down in the mid-1980s, and has been a popular hiking destination with its rock spires and riparian areas. Tuff is volcanic rock often used in construction of buildings, such as the Arizona State Capitol building, which utilized tuff from the Kirkland Mine.

Rem Hawes, Hassayampa BLM field office manager, said this piece of public land has been mined since the 1890s. KMC owns 18 unpatented mining claims on the property near Kirkland. In late August, Zouvas withdrew an application for mineral sales operation and filed a conditional use permit for exploration, which limits surface disturbance to a 5-acre parcel for sampling of materials up to 1,000 tons.

"In the mining world, that is literally scratching the surface," Hawes said.

KMC also may drill up to seven core holes about 4 inches in diameter and 75 feet deep. An application for exploration does not require an environmental assessment.

The company, however, cannot sell any of the tuff deposit identified as high quality pozzolan. It can send samples to a variety of industries to find out whether the material is useable and marketable. Several people at the meeting thought Zouvas would file an exploration application five acres at a time, but it would not make economic sense to do so since they couldn't sell any of it, Hawes told them.

His job is to check Kirkland's plan and monitor the process, and so far, KMC is fulfilling the rules.

"After they give away 1,000 tons, they may say, 'This is great.' If it's really good, they can come back with a plan of operation," he said.

If the company decides to set up commercial operations, BLM will require an environmental assessment.

Allison Dixon has created the KirklandMineForum.org website that includes minutes from the Oct. 21 meeting, data sheets on toxic materials found at the Marietta Mine in North Carolina, a data sheet on erionite, and photos.

Brian Hampton thinks misinformation and fear are driving some community members. Both he and Chris Gibson support Zouvas.

"Everything they do is with diligence and profession," Hampton said. He told the audience that Zouvas was not interested in attending "lynch mob" meetings, but she would meet with residents one-on-one.

Gibson, a mining site operator, spoke to the health concerns regarding dust particles, saying strict regulations require trucks to "shake off" dirt and dust before heading out onto the roads.

"If you don't like seeing the dust, just call this lady and she'll shut it down," he said, pointing to Sybil Smith, community liaison with the Arizona Department of Environmental Quality, who nodded in agreement.

When asked whether the county had a position regarding trucks on the highway, Mauk said he may be able to compel Kirkland Mining Company to mitigate any impact the trucks may have, but "these are public roads; we can't restrict use."

One audience member said he worked seven or eight years at the mine site when it was functional until 1985 or 1986.

"If there were any contaminates in it, I'd be a contaminated son of a gun. I'm pretty healthy," he said. "If you didn't know there was a mining operation on the property, you would never hear the noise. The trucks never bothered anyone," he said, adding that his father worked there and he lived to be 100.

Scientists find no cancer-causing erionite at Kirkland mine site
Community meeting in Skull Valley on Kirkland Mine concerns
BLM approves Kirkland Mining Company’s request for pozzolan mine
Proposed Kirkland mine will be topic of meeting Thursday
Truckloads of pozzolan on county, city roads elicit residents’ ire