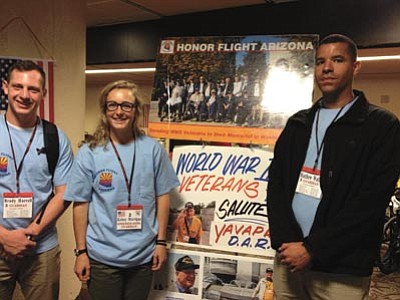 Yavapai Chapter Daughters of the American Revolution sponsored 28 WWII veterans to go on an Honor Flight with Honor Flight AZ to Washington, DC on April 7-9. This is the third trip that the chapter has sponsored since they became involved in early 2014. Five of the chapter's 64 members, including two on this trip, have been privileged to go along with the veterans to visit the World War II Memorial and other sites in the Washington, D.C. area. The group also visited the home of the "Star Spangled Banner" at Fort McHenry in Baltimore, Maryland. All of the veterans came from Arizona and were met with cheering and applause at the airports at both ends of the excursion.

Three Embry-Riddle Aeronautical University cadets, who were sponsored by the Yavapai Chapter DAR, Honor Flight Arizona and ERAU went on the flight in the role of guardians. Guardians try to make the journey become the "trip of a lifetime" to the veterans and to assist the veterans in having a safe and rewarding time. All of the guardians that have participated in the three Honor Flight treks agree that it was extremely rewarding for them and they would not have missed it.

The group visited the U.S. Capitol where they saw the new statue of Barry Goldwater in Statuary Hall and the World War II Memorial both in the daytime and later after dark. The Memorial in the darkness is truly awe inspiring. They also stopped off at the Vietnam Wall, Korean War Memorial and the Lincoln Memorial. They had dinner at Ft. Myer which is the place where the soldiers who are responsible for guarding the Tomb of the Unknown Soldier are stationed. The vets watched the changing of the guard and the retiring of the colors at Arlington National Cemetery. The day was truly remarkable for all that was seen and experienced.

The following day started with breakfast for the vets whose average age is 93. They then boarded the bus that took them to Ft. McHenry to see the place where in 1814, American troops held off the British Navy and Francis Scott Key wrote the words of the Star Spangled Banner that would later be set to music to become the National Anthem.

At the end of the trip, all were exhausted and yet exhilarated by the entire happening. The group of vets arrived back in Phoenix, where they were welcomed back as the heroes that they truly are.